This is why you never turn your back on a toddler

MARYVILLE, Tenn. – A toddler is safe after he was found stuck in a toy vending machine. 18-month-old Colin Lambert climbed into the machine at a coin laundry mat and could’t get out.

Colin's grandmother, Diane O'Neill, says she looked away for just a moment to check a text message, and the little boy crawled in the machine while she was distracted, according to WBIR.com.

"All I could see was his feet. He had already crawled in," she said. "I grabbed his feet and he kicked my hand and got in. Climbed up over the glass partition and sat down in the toys."

Colin loves crawling into everything so, O'Neill was not surprised when she found him in the vending machine but she was worried about the dangers inside the machine. 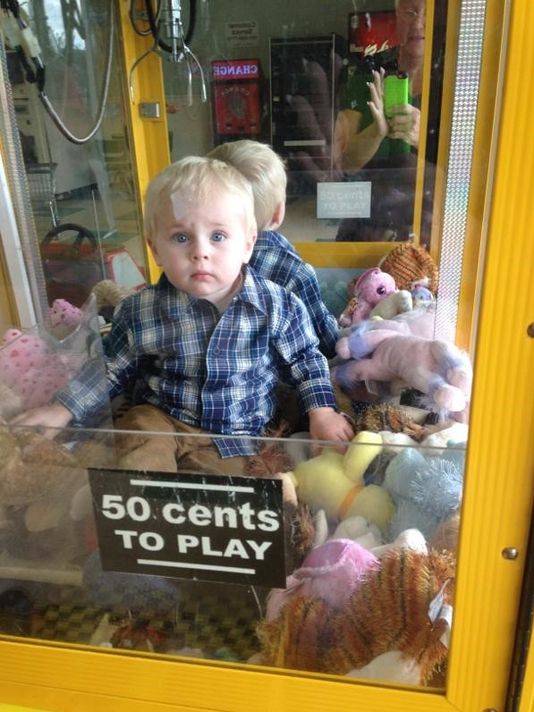 "My biggest fear was that he was going to climb back over and try to get back out," she said. "The plastic they had that held the toys in is cracked and broken in several places. I was afraid he was going to try to climb over and get hurt."

Maryville Fire Deputy Chief David Hodges said firefighters got the little boy out in a matter of minutes and the child was very excited to see the firefighters.

According to WBIR, this wasn't the first time someone in the O'Neill family needed to be rescued by police. When Colin's aunt was younger, she locked herself in a bathroom at TCBY Yogurt and police had to come open the door. Colin's uncle also once got stuck in a picnic table and had to be pulled out by firefighters.