Police want you to see photos of the ‘steak knife’ robber

“The suspect entered the business, approached the clerk, displayed a knife and demanded money,” Chesterfield Police wrote in an email. “Upon receiving the cash, the suspect fled on foot and may have headed north parallel to Jefferson Davis Highway.”

Witnessed said the knife used in the robbery looked like a steak knife. No one was hurt during the crime, but one store clerk quit her job because she was so shaken by the experience. 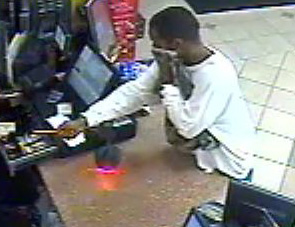 “This kind of thing doesn’t happen in Chester. It is surprising,” Anil Patel, who owns the nearby Suburban Hotel, said upon learning about the robbery. “It is scary, it’s nerve-racking.”

Police described the suspect as a black male, about 5 feet 8 inches tall with a thin or slender build.

"He was wearing jeans and a white T-shirt, and was holding a camouflage shirt over his face," police said.