SCROLL DOWN for the dramatic before and after photos!

(CNN) — Edgar Hernandez didn’t expect to learn that he was pre-diabetic at age 16.

When his mother burst into tears at the doctor’s office, it hit him hard. He was 370 pounds and couldn’t stand to look at himself.

It was tough being a fat kid, but things became unbearable in high school. Edgar was seeing a therapist for depression symptoms. He was frequently bullied in gym class. Kids would point at his “fat wobbling everywhere,” especially as he struggled to keep up.

“I tried my best to ignore it. But there were times when I just gave in and started crying,” said Edgar, who lives in a suburb of St. Louis and is now 18.

Everyone in his family had a weight problem; his parents developed type 2 diabetes in their forties. But Edgar was the biggest.

“He would eat two really big burritos or sandwiches a day, packed with cheese, sour cream, a lot of bread, butter,” his older brother Mario said. “He would be watching TV, playing video games.”

After receiving the sobering blood test result at the doctor’s office, Edgar went home and cried. And then something new happened: He owned up to his weight problem.

“It was time to stop blaming others for my choices and make a choice to take responsibility,” he said. 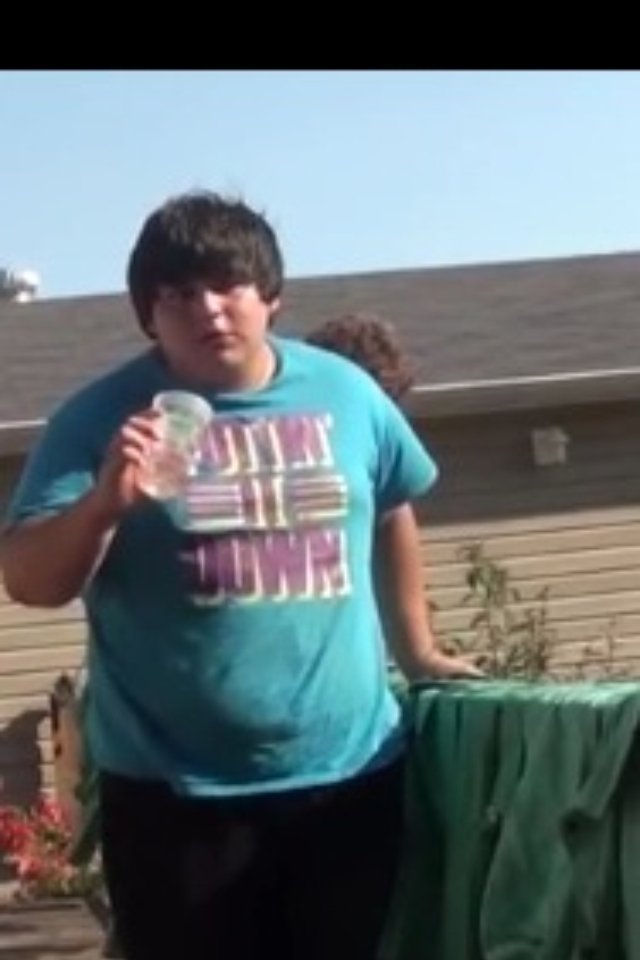 He dried his tears, threw on his jacket and began jogging. He only got about half a mile before he stopped and threw up.

That was a year and a half ago. Edgar, who is 5-foot-9, went on to drop nearly 200 pounds. He now weighs 185 pounds. He has traded his double-XL shirts and size 48 pants for medium T-shirts and 33-inch pants.

It happened slowly at first.

After that gut-impulse jog in November 2012, Edgar started walking before or after school. As he could, he added distance until he was walking about two miles a day. He started to incorporate running intervals until, months later, he could run a full mile.

The weight began to come off, but the teen wasn’t seeing as much progress as he had hoped. It was his older brother, Mario, who helped him kick the weight loss into high gear.

Mario, who carried 235 pounds on his 5-foot-7 frame, was inspired by Edgar’s will to change. He took Edgar to the grocery store and together they overhauled the family’s pantry. Chicken breasts and fresh produce replaced the processed foods and sodas that were once the staple at home, Mario said.

Edgar’s typical breakfast became a peanut butter sandwich with honey and banana slices. Dinners usually featured a chicken breast with two cups of broccoli. He didn’t have a specific diet or calorie count; it was all about portion sizes, the teen said.

The brothers became each other’s support. They started running together in January 2013, buying sweatpants and thermal gear to keep them warm in the Illinois weather.

Mario has lost 70 pounds and continues to run alongside his brother, Edgar said.

The brothers, who live at home with their parents, have seen their weight loss inspire some changes for the whole family, Mario said. The family has cut down on eating out — once every couple of weeks, as opposed to four to five times a week.

“As a family, we go outside more, walk a little more. It shows because we have a lot more energy,” Mario said. “Even though other members haven’t lost as much weight, maybe five pounds, you can see it in their faces.”

These days, Edgar can’t get enough of running. His favorite activities are heavy cardio and weightlifting. The teen even ran his first half-marathon in April, and he’s planning another one soon.

“Running is what made me feel happy; I had gotten what they call ‘runner’s high’ and now running has become a lifestyle,” he said.

Edgar has also found his calling in his new healthy lifestyle. He will start college at Southern Illinois University-Edwardsville in the fall and plans to study exercise science.

For Mario, watching his little brother shed the pounds at such a young age has been a source of pride.

“If you would have told me three years ago that he’d be running a half-marathon, I wouldn’t believe you,” Mario said. “You see a completely different person that’s a lot happier, has more energy and is more active.”

“I wouldn’t even step out my door to get the mail before,” he said. “People don’t see the dark, sad side of me anymore. They see a bright, happy kid.”

For the people out there looking to lose weight, the teenager has the following advice: Don’t put it off. If you say you’re going to run, do it today, not tomorrow.