According to Henrico fire, crews responded to the 7600 block of Sunnybrook Drive in the county’s West End around 2:54 a.m. Sunday.

Crews reported smoke coming from the rear of a single story residence and found fire at the rear of the structure.

The fire was quickly contained area of origin and marked under control at 3:18 a.m.

One adult female was home at the time of the fire and was alerted to the fire by smoke detectors in the home and was able to make it out uninjured. She is displaced after the fire.

The fire originated in the basement of the home. The home suffered minor smoke and damage. 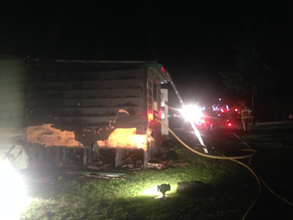