LYNCHBURG, Virginia (CNN) — Railroad workers in Virginia began trying to pull wrecked tank cars out of the James River Thursday as safety officials began trying to figure out why a train full of crude oil jumped the tracks and caught fire in the heart of Lynchburg.

Thirteen of the 105 cars derailed Wednesday afternoon, and three of those ended up in the James River where it winds past downtown Lynchburg, National Transportation Safety Board investigator Jim Southworth told reporters. The train was made up entirely of tank cars full of crude, and about 50,000 gallons of it were unaccounted for after the crash, authorities said Wednesday night.

There were no injuries in the derailment, but the resulting fire sent a pillar of black smoke rising over the city of about 78,000 people and forced the evacuation of much of its downtown for several hours.

Most of the oil that spilled from the train cars appears to have either burned off or has been contained, said William Hayden of the state Department of Environmental Quality.

There is an oil sheen on the river that stretches for about nine miles, and department personnel are testing water samples, he said. 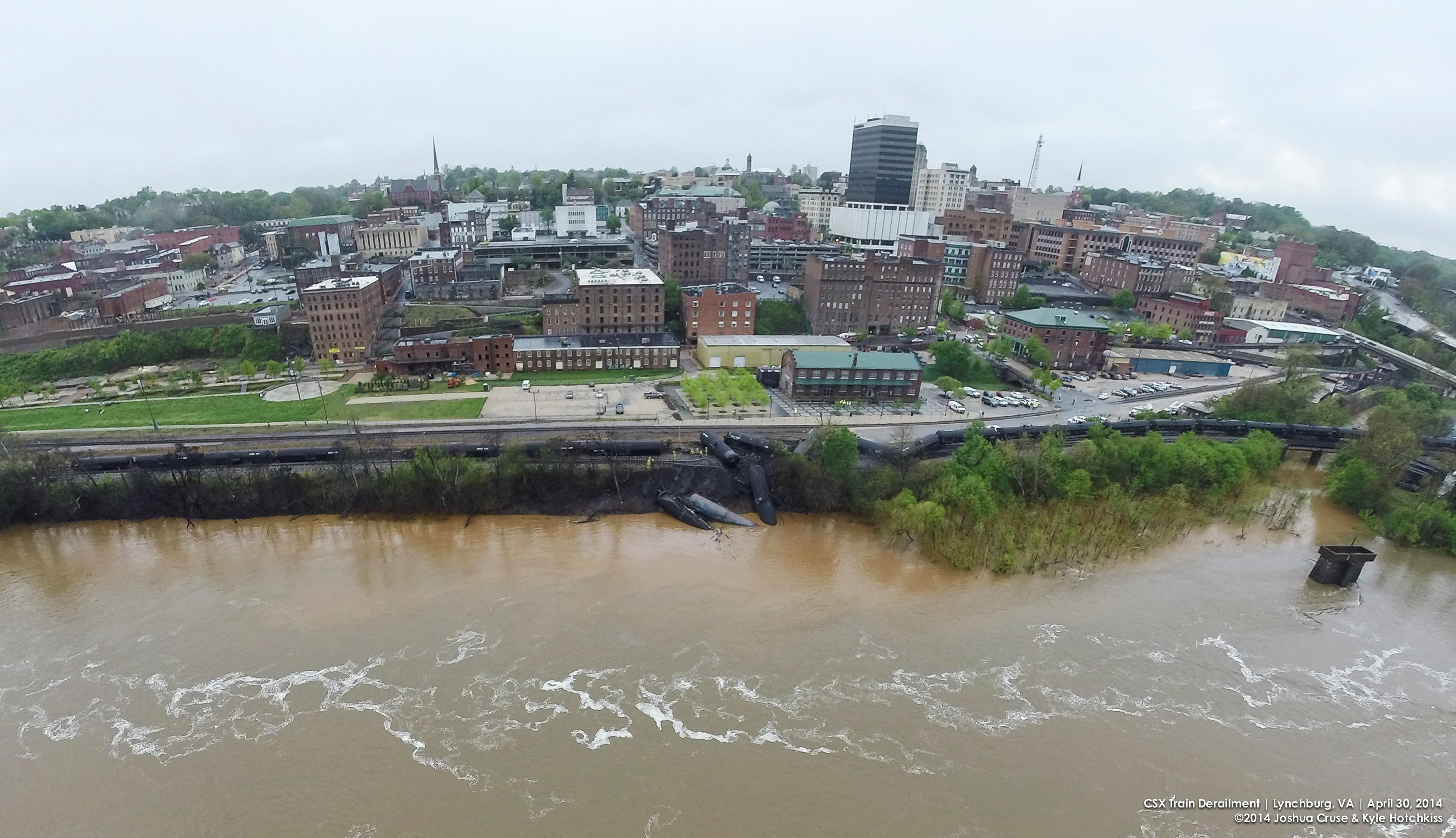 “We do expect that much of the oil that remains will be broken up by the fast-moving water of the James,” Hayden said.

Southworth said investigators were just getting to work and began interviewing the crew Thursday afternoon.

In addition, the condition of the track and its bed after heavy rains will be one of the things they will examine, said NTSB spokesman Keith Holloway.

Lynchburg municipal spokeswoman JoAnn Martin said worker were expecting to finish hauling the cars out of the river Thursday night. Parts of the railbed underneath the tracks had collapsed in the derailment and the remaining track was twisted, but Southworth cautioned that investigators may not release any conclusions for more than a year.

“This will be a well-orchestrated industrial ballet,” he said.

The amount of oil shipped by rail has increased fourfold since 2005 amid a drilling boom in North Dakota and Canada. Those shipments have been under scrutiny since the derailment and fire that killed 47 people in a small town in Quebec last July, and environmentalists warned against having trains haul oil through downtown Lynchburg in March.

Some of the cars on the train were of a model that the NTSB has said has a high incidence of leaking during crashes. But Southworth said investigators don’t know whether any of the cars that derailed Wednesday were among them.

The Association of American Railroads estimates that more than 90,000 of those cars are used to carry hazardous materials. About 14,000 of them have been built to the latest safety standards, the association says.