MAYFLOWER, Arkansas (CNN) -- Parts of the South and Midwest may be in for more severe weather Monday, a day after suspected tornadoes killed at least 16 people in three states, including 10 who died in one devastated Arkansas county.

"There were cars flipped everywhere, there were people screaming," James Bryant, a Mississippi State University meteorology student, told CNN's "New Day" on Monday after a suspected tornado in Faulkner County, Arkansas. "It was a tough scene."

That work will continue throughout the day behind a police cordon that's keeping residents, would-be volunteers and gawkers at bay, he said.

He said it's "entirely possible" the death toll will rise as emergency crews search the wreckage of destroyed homes, including some only recently rebuilt after being flattened three years ago by another tornado.

Arkansas Gov. Mike Beebe said the storm was one of the worst to hit the state in recent memory.

Meanwhile, parts of Arkansas and several other states face a renewed threat of severe weather. In Alabama, numerous school districts announced plans to dismiss early Monday afternoon in advance of the worst weather.

About 3 million people in the South and Midwest are under a moderate threat for severe weather Monday, CNN meteorologist Indra Petersons said. About 24 million are at slight risk of severe storms, she said.

Monday's forecast calls for a moderate risk of severe thunderstorms, tornadoes and hail in parts of the South. Portions of Mississippi, Alabama, Tennessee and Louisiana are at the greatest risk, according to the Storm Prediction Center.

The storms also will stretch into the Midwest and Ohio River Valley, with much of Illinois, Indiana and Kentucky at a slight risk of severe weather, forecasters said. 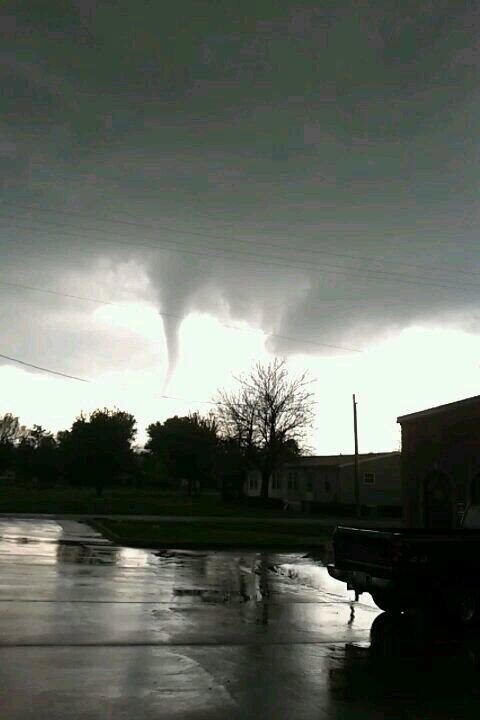 Arkansas officials reported 16 people had died there in Sunday's storms. They had earlier reported 18 deaths but said that figure was in error, Arkansas Department of Emergency Management spokeswoman Kathy Wright told CNN.

Only three people had died in Pulaski County, not the five reported earlier, she said. Officials say one person also died in White County, Arkansas and one each in Oklahoma and Iowa.

The storms boiled up after nearly a week of forecasts calling for severe weather, including a rare "high risk" warning from the National Weather Service's Storm Prediction Center.

Resident Bryant Pruitt said he ducked into his house when he saw a storm cloud approaching from the southwest.

"It was huge. It was by far the biggest one I've ever seen," he told CNN affiliate KTHV. "It was a huge black cloud ... and I ran inside."

Another meteorology student, Cotton Rohrscheib, described how the storm picked up his truck and skidded it about 120 feet down a highway.

"We were all hunkered down inside of the truck, and praying," he said.

None of the truck's occupants were seriously hurt, he said.

"We were very fortunate to walk out of there."

Vilonia Mayor James Firestone described a scene of chaos in his town hours after the storm.

"There's a few buildings partially standing, but the amount of damage is tremendous," he said Sunday. "There's gas lines spewing. Of course, power lines down. Houses are just a pile of brick."

Authorities shut down a section of Interstate 40 after a tornado "as much as a half-mile wide" roared through the area, according to the National Weather Service.

The heavily used road was littered with crushed and overturned trucks and cars.

CNN meteorologist Chad Myers, who was in Mayflower, estimated the winds from the storm were at 130 to 150 mph.

Emergency workers tended to the scene throughout the night. Shelters were set up at the high school and at a local church.

The city's official website said schools would be closed Monday.

Nearly 18,000 homes and businesses were without power in Arkansas on Monday, more than 10,000 of them in Faulkner County, Entergy Arkansas reported.

Emergency crews weren't sure of how many people were missing Monday morning, said David Maxwell, director of the Arkansas Department of Emergency Management.

"I know crews were extremely busy going door to door last night, but it's just so hard to do with the power out and after dark," he said.

Beebe, the Arkansas governor, issued a disaster declaration for Faulkner, Pulaski and White counties, and President Barack Obama offered his condolences and promised storm aid to victims while on a four-nation tour of Asia.

'Tell the public to stay away'

Before the bad weather slammed into Arkansas, witnesses spotted a twister in the northeast Oklahoma town of Quapaw, where one person died, the Ottawa County Sheriff's Office said.

Joe Dan Morgan, the county's emergency manager, said rescuers were working in an area where a concrete wall crashed onto a car.

There were other reports of damage in the community, stretching authorities thin.

Quapaw is near the border with Kansas and Missouri.

The same line of storms hit Baxter Springs, Kansas, just a few miles to the north. Sixty to 70 homes and at least 20 businesses were reported destroyed, said Cherokee County emergency manager Jason Allison. A tornado estimated to be three blocks wide rumbled through the town of 4,200, he said.

The one bright spot amid Sunday's devastation were the forecasts that predicted the severe weather days ago, storm chaser Brett Adair said.

"This definitely was not something to take lightly," he said.