2 killed when helicopter crash onto cars near Seattle Space Needle 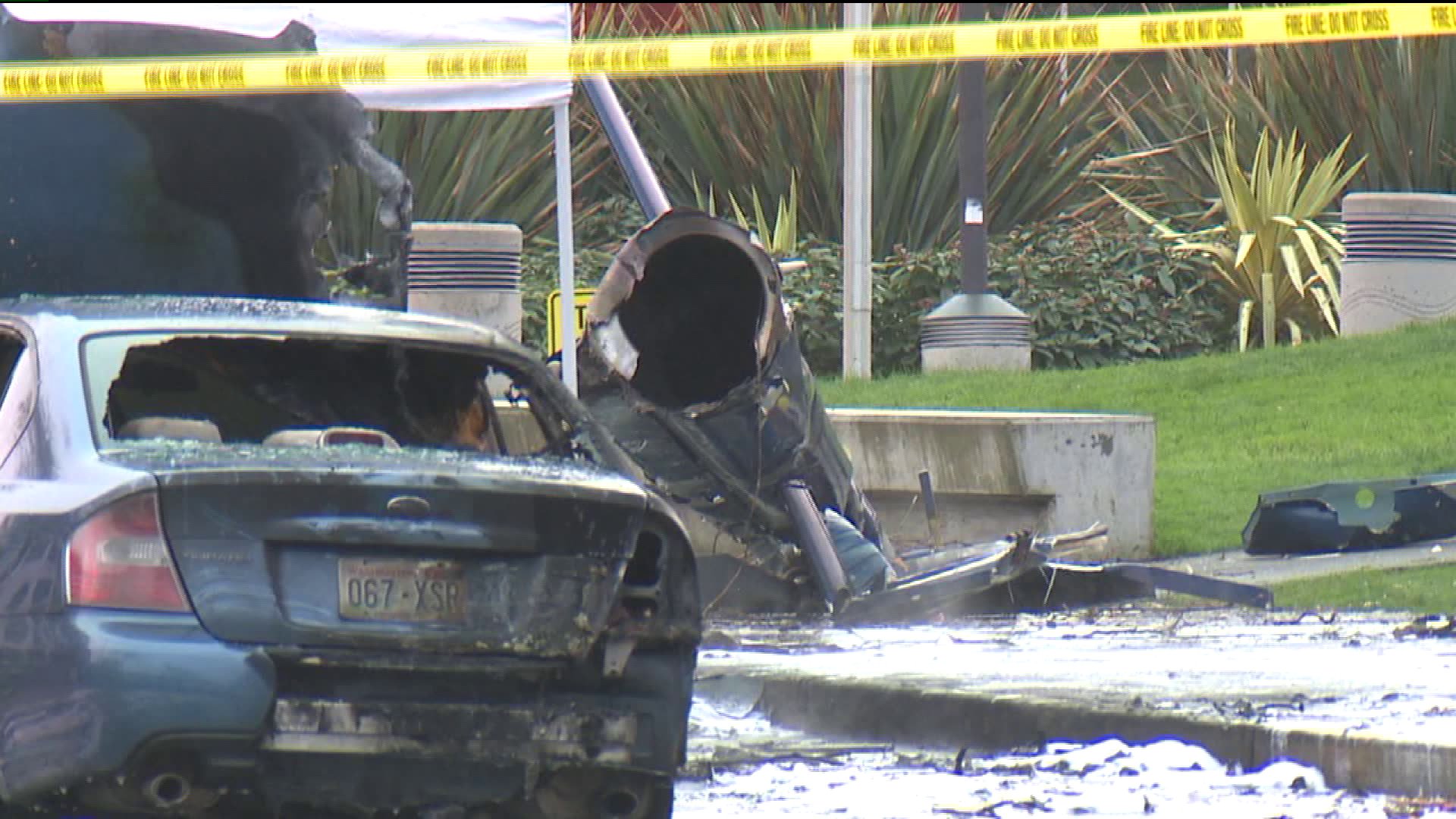 (CNN) — It was the sound of the engine that alerted some people who were in Seattle’s Fisher Plaza Tuesday morning that something was amiss.

At about 7:40 a.m., Bo Bain was a few feet from the famed Space Needle that towers over the northern end of the city when he heard sounds he has grown accustomed to hearing during his work in the tourist district on a construction project.

“We were working here on the corner and the helicopter came in and landed, as he usually does several times a day,” Bain told CNN affiliate KOMO.

The pilot put the news helicopter down on a landing pad outside KOMO’s offices “for a minute or two,” and then tried to rise again into the air, Bain said. That’s when the routine engine noises changed abruptly, and Bain knew something was up.

“When he went to take back off, the sound of the helicopter changed kind of drastically, and I looked and the helicopter was almost immediately pitched sideways and off balance, and he kind of just nose-dove over the trees, and clipped the top of the trees and crashed just on the other side of the street there.”

As soon as it hit the ground, the helicopter burst into flames and a line of aviation fuel started running down Broad Street. It was more than two hours before the Space Needle was to open but at a time when the area was abuzz with commuters en route to work. The Bill & Melinda Gates Foundation offices are about a quarter-mile away.

“It was kind of chaotic there for a few minutes” as people abandoned their cars and smoke billowed into the air, Bain said. One driver did not wait to find out what had happened. “She made a U-turn and got out of Dodge as quickly as possible,” he said.

The helicopter — leased by CNN affiliate KOMO — had crashed. Both people inside were killed, and one person who was in one of three vehicles that caught fire was critically burned, officials said.

KOMO identified the dead men as Bill Strothman, a KOMO photographer, and Gary Pfitzner, the pilot.

Strothman had earned 14 Emmy Awards during his career and was working as a freelancer after having retired from KOMO.

“He really knew how his pictures could tell a million words,” said KOMO News Anchor Dan Lewis. Strothman also worked for the helicopter leasing company that was operating the helicopter, the station said.

Pfitzner too was a familiar face at the station. “He always had a smile on his face,” said anchor and reporter Molly Shen. “He loved what he did, loved to be able to fly and be up there above the city and see things from a perspective that most of us don’t get to see.”

CNN affiliate KING reported that the aircraft was managed by Helicopters Inc., a company that specializes in the design, construction and leasing of news helicopters.

Daniel Alejandro Gonzalez told CNN affiliate KIRO that he had gone outside to smoke a cigarette when he heard the helicopter engine turn over. “About 15, 20 seconds later, I heard it, it sounded like in the movies — when it goes into slow motion, when you hear the ding, ding, ding … and after that I heard it collapse. I heard it hit the ground, and that’s when I looked up.”

Within a couple of seconds, the scene was ablaze.

As he thought about what he might do to help, Gonzalez said, he saw a man who had gotten out of a red car. “His shirt was in flames, his head was bleeding,” Gonzalez said. “He walked about 20 feet and he collapsed.”

The injured man had extricated himself from his vehicle and was taken to Harborview Medical Center in critical condition, with burns over 50% of his body, said fire department spokesman Kyle Moore, who added that the man is 37 years old.

A hospital spokeswoman, Susan Gregg, said doctors were evaluating the condition of the man, whom she said is 38. She said doctors at the level-one trauma center had sedated him, put him on a ventilator and were administering fluids. They were still trying to determine the extent and severity of the burns, she added.

Gregg said the man may have helped reduce the severity of his injuries by rolling on the grass, extinguishing the flames.

A man who had been driving through the plaza told KIRO that he became aware something was wrong when his passenger told him that the helicopter “doesn’t look right” and he looked up to see the helicopter in distress.

“It was yawing back and forth, up and down,” the driver said. “It was just a matter of seconds before it just slid sideways, came down, hit a couple of cars and crashed in front of us.”

As debris flew by them, he and his passenger ducked behind the dashboard. “Something did hit my car, but fortunately it didn’t hit my windshield,” he said.

A woman inside a second car was not injured; a man inside a third vehicle — a pickup truck — left the scene, but authorities caught up with him and determined that he was not hurt, the fire department said.

Moore said that he didn’t know what led to the crash, but that it did not appear that any buildings were struck by the leased helicopter, which was destroyed. “What we have left is basically just a part of the tail and burnt-out metal from the main chassis of the helicopter,” he said.

Arriving firefighters found lines of blazing fuel in the street and thick, black smoke covering the area, with “wreckage strewn across the lawn along with wreckage across the street,” he said.

CNN affiliate KOMO said the helicopter crashed near its offices. It was used by KOMO and KING, also a CNN affiliate, according to KING’s website.

Rich Marriott, a meteorologist for KING, said weather did not appear to have contributed to the crash — visibility was clear and winds were calm, he said.

Representatives of the National Transportation Safety Board arrived within a few hours and will take the lead in the investigation; the Federal Aviation Administration will also help.

The NTSB investigator usually posts a basic preliminary report on the agency’s website within a week or two of an accident, but usually takes months to determine probable cause, said Allen Kenitzer, an NTSB spokesman.

The FAA said the helicopter was a Eurocopter AS350.

The Space Needle closed for the day “out of respect for those impacted,” the attraction’s Facebook page said.