WEATHER BLOG: Storm will start as rain, transition to sleet in a.m. 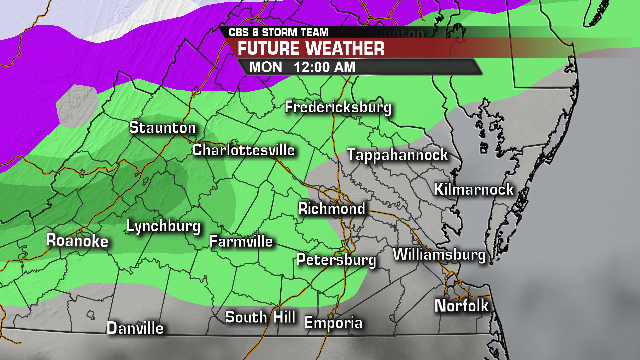 RICHMOND, Va. (WTVR) — Sunday gave us a shot of spring with highs reaching the 60s and lower 70s.  Monday, on the other hand, will be very wintry.

A powerful storm will track through our area during Monday.  Precipitation will start off as rain, but then transition to sleet.  There could be a brief period of freezing rain in a few spots.

As colder air spills into the region Monday, the sleet will change to all snow.  There will be a few hours of moderate to heavy snow and sleet.  Accumulations will be of sleet first, and then snow on top of it.  Some of the bursts of heavier activity may be accompanied by rumbles of thunder.

Temperatures will start off in Richmond above freezing just before daybreak, but then crash quickly into the 20s.

Accumulations are a tough call, due to the fact that we expect an extended period of sleet in the Metro.  However, the potential exists for a 4-7″ band of snow & sleet accumulation to set up over the Metro.  The farther south you go, the more sleet and mixed precipitation will be involved, holding down accumulation totals.  Well north and west of the Metro, from northern Caroline west to Louisa and Charlottesville and points north, more than 6″ appear fairly likely.

We want to emphasize that these are *potential* accumulations, all depending on how much precipitation falls as sleet vs. snow.  More sleet would tend to keep the totals on the lower end.  Our confidence level for a significant “wintry” event is high across the entire area.

In the Metro, let’s take a more detailed look at what the chances are for different amounts of snow.  Amounts of a few inches are extremely likely, with a high chance of at least 4″.  The chances of snowfall hitting or exceeding 8″ are not high.

Behind this storm, very cold air will stick around through Tuesday, with temperatures some 20° below “normal” for this time of the year.  Icy conditions are likely Tuesday morning.

Temperatures will moderate during the middle and end of the week.  Highs next weekend will be well into the 50s.

Stay with CBS 6, We’ll Keep You Ahead of the Storm.