CHARLOTTE, North Carolina (CNN) -- The fallout over one of the largest coal ash spills in U.S. history continued Tuesday as environmentalists staged a protest at the headquarters of the company responsible for the incident, the federal government launched a criminal investigation, and officials warned residents near the potentially contaminated river to avoid contact with the water until testing is finished.

Residents who live on the Dan River in North Carolina near the retired Duke Energy power plant where millions of gallons of coal ash and wastewater were leaked also were advised to skip eating fish from the water for now. 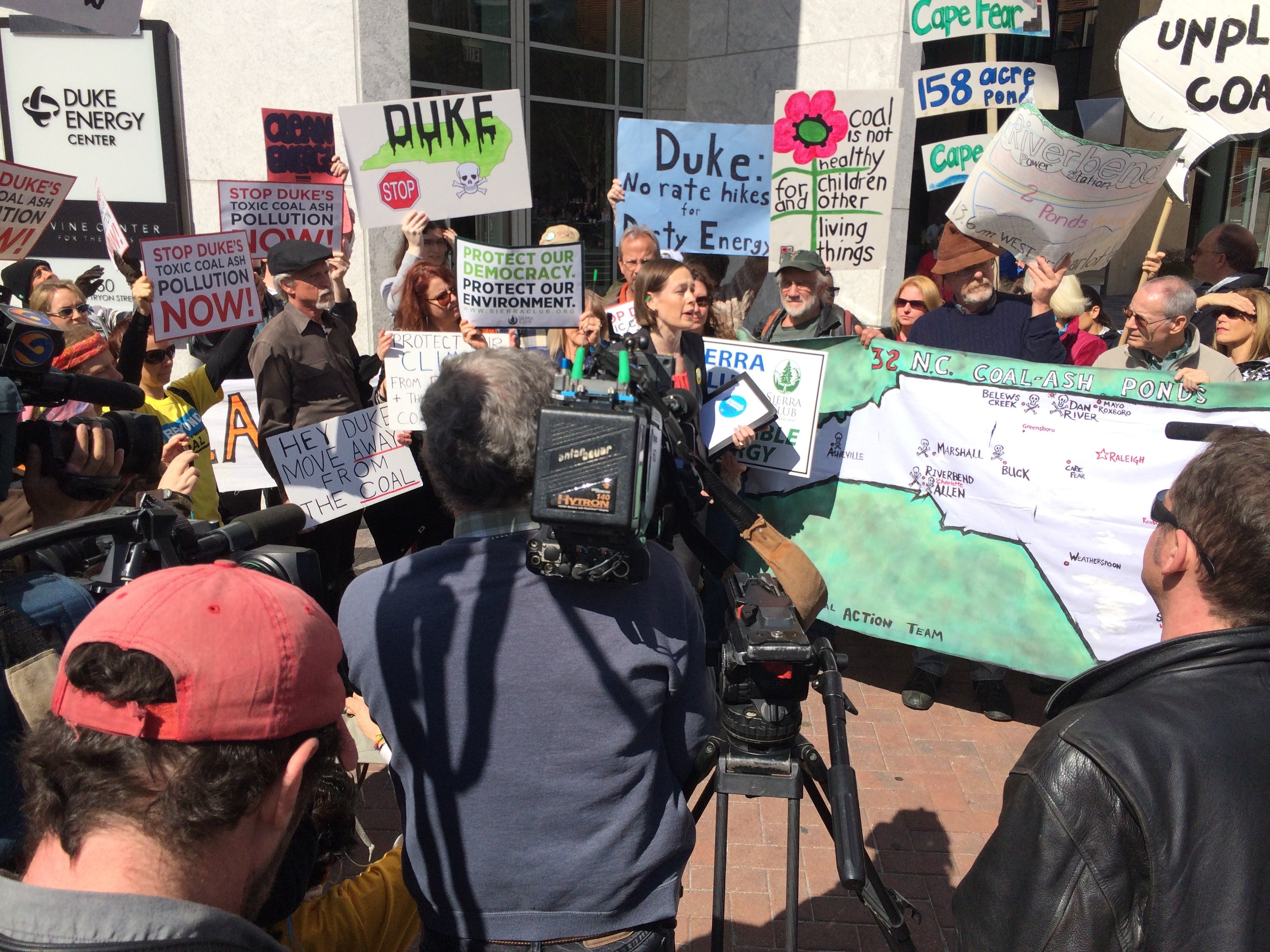 The North Carolina Department of Environment and Natural Resources on Tuesday told Duke Energy it is considering changes to its wastewater permits for coal ash ponds after the February 2 leak at the former plant in Eden.

Dozens of demonstrators paraded in front of the corporate headquarters of Duke Energy in Charlotte, demanding answers to what environmentalists believe are many questions in the wake of the spill, which dumped coal ash, the byproduct of burning coal, which is made up of aluminum oxide, iron oxide and silicon oxide. It also contains arsenic, mercury and other metals.

The natural resources department said Tuesday it has been testing the water near the plant since the incident and began this week to catch fish for testing.

"This needs to be our last wake-up call. Our last coal ash spill," said Mary Anne Hitt of the Sierra Club.

"We are here to say no more. No more coal ash in unlined ponds. No more leaks that seep into our drinking waters. No more stalling. No more excuses. No more hiding behind political allies. We are here to draw the line, Duke," Amy Adams of Appalachian Voices told the crowd.

Organized by the Sierra Club, the demonstrators held placards and tried to deliver 9,000 petition signatures from Duke Energy customers asking that all coal ash ponds be removed.

Two security guards outside the building would not let a leader of the demonstrators deliver the petitions and a spokesman for Duke told CNN's Drew Griffin that building security was to blame.

"We don't own the building," the spokesman said.\

Earlier, a Duke spokesman said no one from the company would accept the petitions in person nor speak on camera to CNN.

In an e-mail, the Duke Energy representative said of the leak and the company's response: "The drinking water has remained safe. The pipe has been permanently plugged. We take responsibility for this event and also are taking another look at the management of our (14 North Carolina) ash basins."

CNN affiliate WRAL reported that state officials have said there is no immediate danger to municipal water supplies even though sediment from the spill is on the river bottom for 70 miles.

On February 2, a leak in a 48-inch stormwater pipe sent coal ash and wastewater pouring into the river. In statements announcing the spill, Duke Energy said up to 82,000 tons of ash had been released and up to 27 million gallons of basin water had flooded into the river. The company has since revised that figure to as much as 39,000 tons.

Researchers from Wake Forest University who used cameras on an unmanned aerial aircraft to create a 3-D image of the spill said Tuesday that as many as 35 million gallons of arsenic-contaminated water and ash may have made its way into the river. That would be equivalent to the amount of water in 53 Olympic-sized pools.

A week after the spill, the company said it had plugged the broken line and was working with officials on developing a cleanup plan. The utility also apologized for the spill.

"We're committed to the Dan River and the communities that it serves," Charlie Gates, the company's senior vice president of power generation operations, said in a statement. "We are accountable for what has happened and have plenty of work ahead of us."

Environmental groups said they believe the department of natural resources, which regulates power plants, has been lax in regulating Duke Energy. The agency reached a $99,000 settlement with the company earlier this year over two other coal ash storage sites.

Frank Holleman of the Southern Environmental Law Center said that settlement is not enough.

"We want the pollution cleaned up, remove it from unlined lagoons and move it to safe storage. We have not focused on the penalty. We want the solution."

The federal government has launched an official criminal investigation into the spill. Duke Energy has confirmed to CNN that the company has been served with two subpoenas, but would not characterize them in any way.

North Carolina's Department of Environment and Natural Resources provided CNN with copies of the subpoenas it received. Nearly 20 employees of the department have been ordered to testify in front of a grand jury in March.

The agency has been ordered to produce documents dating back to 2010, including communications between Duke Energy and department employees.