Police: 15-year-old driver in stolen van rams troopers on I-95

SPOTSYLVANIA COUNTY, Va. (WTVR) - A 15-year-old boy driving a stolen van was taken to the hospital after he flipped the van on Interstate 95, according to Virginia State Police.

Police attempted to stop the white Dodge van about 9:30 a.m. Sunday after it was involved in a hit-and-run on I-95 near the Caroline County/Spotsylvania County line.

The hit-and-run happened at the 104 mile marker, troopers spotted the van near mile marker 119. When the trooper attempted to stop the van, the teen driver kept on driving, according to police.

"When somebody is swerving like that I wanted to see is he texting?  Why is he swerving all over the road?  He looked right at me, and he seemed like he was fully aware of what he was doing,” said Sindua Kapalczynski, who saw the van speeding down the interstate.

CBS 6 reporter Jake Burns spoke to a family who was on their way to Potomac Mills mall when a white van came zooming past them and hit another car.

“Every time we think about it, it gets your heart pumping,” Kenny Congleton said.

Congleton said that his wife shot cell phone video of  the van as it swerving and darting in between lanes as state troopers gave chase. 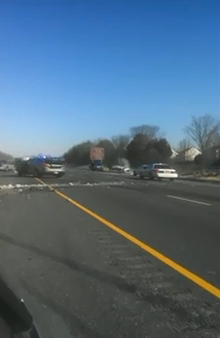 When the teen driver tried to ram a trooper’s vehicle, the trooper’s cruiser ran off the road and hit the guardrail.

“Two cop cars slammed into the guardrail and spun out," Congleton said. "I mean it was, oh my goodness, I was shaking, nervous you know.   "

At mile marker 128, the teen driver rammed a second trooper’s cruiser, police said. The teen driver then lost control and the van overturned in the highway.

The 15-year-old van driver was taken to Mary Washington Hospital with minor injuries. No troopers were injured.

An investigation revealed that the van was reported stolen earlier Sunday morning in Chesterfield County.

The investigation into the incident remains ongoing and charges are pending.