Some Godwin students took it upon themselves to write encouraging comments on Post-it notes and placed those notes on lockers, hallways and classrooms around the school.

Student Katie Meyers said she and others showed up early to school to do their part.

“The reason why I chose to do it, is if that sticky note could make somebody’s day then I think that would be amazing,” Meyers said. 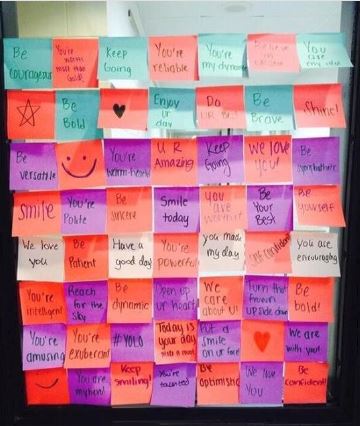 Students wore red on Tuesday in honor of Sims.

"Chris was known by many as one to help others find the bright side in difficult times and an encourager to peers struggling with personal challenges," Godwin principal Elizabeth K. Armbruster wrote in an email to Godwin families. "Chris was a talented singer, a member of our mixed chorus, a future member of our Debut Choir, and a budding thespian who was part of our fall play, 'Our Town.'"

The letter sent to parents did not address the circumstances surrounding Sims' death. School officials said grief counselors were on hand to assist any students or staff that needed it.

Schoolmates said they cannot grasp the personal challenges he may have endured.

Additionally, some Godwin parents said the student’s death is prompting them to speak with their own children about how to deal with life’s obstacles.

“You want kids to know and understand that you are there for them. Whatever problems they’re going through among their peers or in their lives, you want them to know they can talk to you," concerned father Kirk Meyers said.