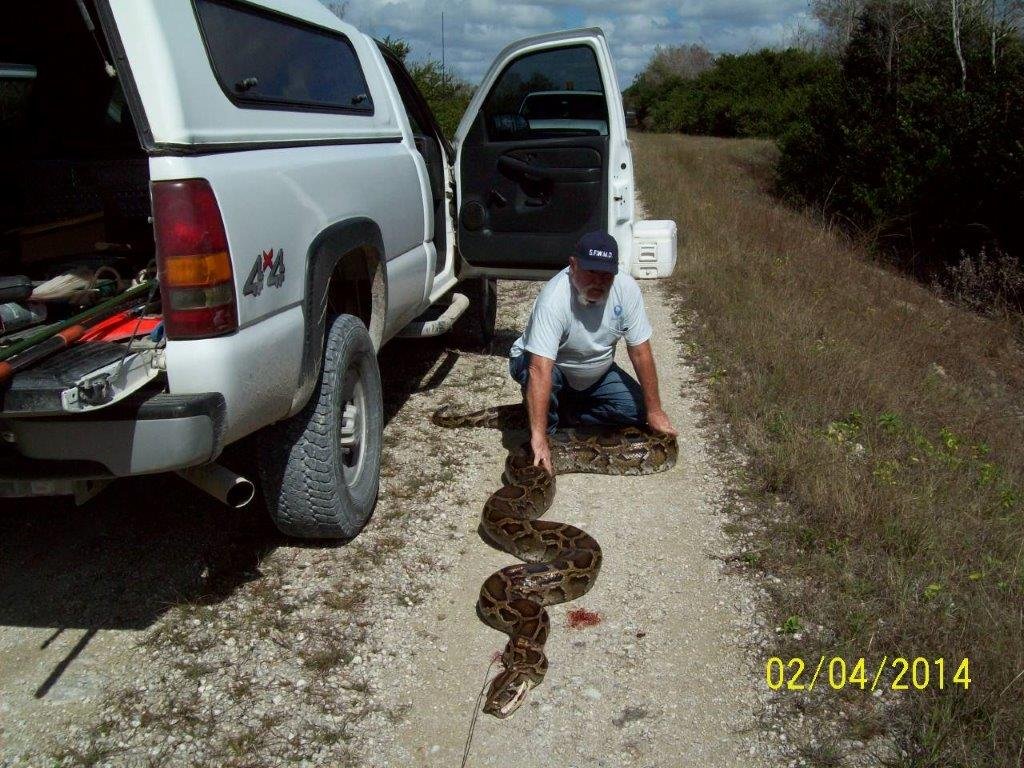 GRAPHIC WARNING: Scroll down for video of  the snake.

Then there’s the disturbing, frightening, shudder-inducing Burmese python that a Florida water-quality maintenance crew ran across this week.

Workers with the South Florida Water Management District often run across the invasive snakes as part of their daily routine inspecting and maintaining canals, pump stations and the like, said agency spokesman Randy Smith.

But this one was something even for the grizzled crew of snake runner-acrossers.

“Needless to say, when you get one this big, it raises eyebrows,” Smith said. “It’s just such a large animal. They have no predators. They’ll eat anything, even alligators. They are ferocious creatures.”

The work crew came across the snake Tuesday in wooded uplands near wetlands a few miles north of Everglades National Park, Smith said.

They called in the agency’s python coordinator, who killed the snake with a shot to the head, Smith said.

Despite the snake’s size, it’s not the biggest recorded in Florida. That distinction goes to an 18-foot, 8-inch specimen killed by a Florida man who spotted it sticking out of bush in Miami-Dade County in May 2013, according to the Florida Fish and Wildlife Conservation Commission.

Before that, the largest python captured in Florida measured 17 feet, 7 inches.

Pythons aren’t poisonous — they squeeze their prey and humans aren’t a frequent target.

But they are killing rabbits, raccoons, opossums, bobcats and other native species and wreaking havoc with the south Florida ecosystems where they’ve taken hold, according to research published in 2012.

Pythons are such a problem that the Fish and Wildlife Conservation Commission held a contest last year to see who could capture and kill as many as possible.

Hunters turned in 68 of the snakes, the longest measuring more than 14 feet long.