Snowy chaos in the South; 4500 kids stuck at schools 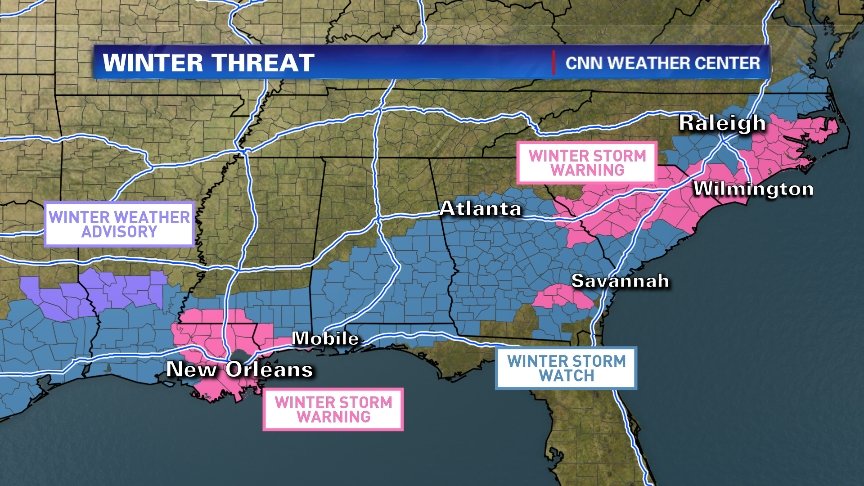 The students had gotten on buses to get home shortly after noon Tuesday, but treacherous road conditions coupled with gridlocked traffic has made it impossible.

Kimberly Willis Green, spokeswoman for Atlanta Public Schools, said she did not have an estimate on the number of children stuck in Atlanta schools overnight.

Atlanta-based Home Depot opened up 26 stores in Alabama and Georgia for stranded travelers.

“At one store, they even opened up an indoor garden area to be a quiet area to open for reading,” he said.

All over the south cars were stuck in ditches beside icy roads. Thousands of children stranded at schools that parents can’t reach. Drivers camped out at gas stations with no way to get home.

As a winter storm slammed into a broad swath of the South on Tuesday, authorities warned drivers to stay off the streets.

“This is a very dangerous situation,” Alabama Gov. Robert Bentley said. “People need to stay at home. They need to stay there until conditions improve.”

Motorists in major metropolitan areas including Atlanta sat trapped in gridlock as schools and offices shut down, unleashing hordes of vehicles onto slushy roadways.

Atlanta Mayor Kasim Reed urged residents to stop driving for at least a day to give crews a chance to clean up.

“The next 24 hours, I really need folks to stay home,” he told CNN affiliate WSB. “Go home, give us some time.”

While Northerners may laugh at their Southern friends’ panic over a dusting of snow, the threat is real: With relatively few resources to battle snow and ice, public works crews may have a difficult time keeping up with any significant accumulation.

Add to that the fact that millions of Southern drivers aren’t used to driving on snow or ice, and things got messy — fast.

Bentley declared a state of emergency and said he had activated 350 National Guard troops to help respond to the storm. Emergency officials warned drivers to stay off the roads and urged people stuck in their cars to stay inside.

“The weather right now, the temperatures and the wind chill, if you step out of your car, are very dangerous,” said Art Faulkner, the state’s director of emergency management.

In Birmingham, Melanie Wilson tried to drive after she got a message that her children’s school was closing Tuesday morning.

“Immediately, I almost had an accident,” she said. “The school buses were at the bottom of our hill and you could tell the drivers were not sure they should try to make it up the hill. We’re not sure where the ball was dropped. We heard it was going to be a light dusting with little accumulation.”

She ditched her car after it spun out on a steep hill, and trudged through the snow to pick up her children and make it home safely.

“The children enjoyed it,” she said. “It was beautiful, a winter wonderland. It was lovely except for worrying about everybody else who can’t get home to their families.”

The severe weather has forced 4,500 students to spend the night in various school buildings in Hoover, Alabama. And there were 800 students stuck in schools in Birmingham, Alabama, officials said.

Bentley urged parents who are unable to reach their children to remain calm.

“I know the anxiety there,” he said. “I want to reassure all the parents that if you trust your teacher to take care of your child during the day, they will be taken care of tonight.”

At the Alabama Waldorf School, about 20 students were spending the night at a nearby home late Tuesday after state officials urged parents not to drive in the snow.

“They’re doing really well,” Administrator Lisa Grupe said. “They’re just having an extended play date. … We all looked like ducks walking in the snow together.”

On Twitter, a second-grade teacher said there were still about 150 students and 50 staff members stranded at Greystone Elementary School in Hoover, Alabama, because of “horrible” road conditions there.

Not that they were all complaining.

“Very exciting day,” teacher Carol McLaughlin tweeted late Tuesday afternoon. “… The kids are being real troopers. : ) I think they think it’s an adventure.” McLaughlin, even posted a picture of some kids out playing in the snow.

In the Atlanta suburbs, school buses were stuck in traffic for hours. Hundreds of students were stranded at schools waiting for their parents to pick them up.

CNN affiliate WSB captured dramatic footage of parents reuniting with children after being stuck on a school bus for hours.

In downtown Atlanta, streets were clogged as cars became trapped in gridlock after at least an inch of snow had fallen.

“Government, schools, and business closing at the same time and releasing everybody out into the city was a mistake that we all were a part of,” Reed told WSB.

For one stranded motorist — it really was a situation of life and death.

Police in the Atlanta suburb of Sandy Springs said an officer helped a woman give birth on the side of Interstate 285.

Traffic jams on snow-covered roads had stopped the woman from making it to the hospital and blocked paramedics from reaching her.

As snow, sleet and freezing rain pelted much of the state, authorities warned of dangerous driving conditions and said the roads would likely get worse. Georgia Gov. Nathan Deal declared a state of emergency as the storm hit.

“I’m about to lose my mind, literally,” one woman trapped in traffic told WSB. “It’s horrible.”

Mhari Patterson tried to make the 10-mile commute to her home outside Atlanta, but gave up after six hours, when she arrived at a RaceTrac gas station parking lot. There were about 80 other cars waiting out the storm there, she said.

“All of the area roads are frozen,” she said. “There is no way to get home.”

Until things clear up, Patterson said she planned to spend the night at the gas station.

The storms also snarled air travel across the country.

It wasn’t just the South shuddering. Midwesterners and others more accustomed to bitter weather are, too.

All told, about 140 million people in 34 states were under some sort of winter weather warning or advisory, from snow and ice to bitterly cold wind chills, according to CNN meteorologist Brandon Miller.

Sleet and freezing rain began falling early Tuesday in East Texas, which along with Louisiana, was the first area to be affected by the winter storm.

Mayor Mitch Landrieu declared a state of emergency and warned residents to stay off the roads.

“We’re looking at a part of the state that has a large number of pine trees,” Latham said. “I can tell you that as ice accumulates on pine trees, limbs will break. Trees will fall. Power will be out.”

It usually takes Krystle Venuti Moore 10 minutes to drive home from her job at a mall in Kennesaw, Georgia. On Tuesday, it took her five hours, even though there wasn’t much snow.

It’s quite a change from how storms were handled in her native New Hampshire, where she lived until she was 15.

There was one perk in the lengthy commute: “watching the community and people helping each other out.”

She saw high school students on ATVs offering rides to stranded motorists. And someone pushed her car when it got stuck.

But it wasn’t all positive. She saw drivers foul up traffic as they spun out after driving too fast, and even when she got close to home, she had to park a mile away and walk.

Normally in five hours, “I could have driven to Florida,” she said, “someplace warm.”