Police: Man with ‘crude’ explosives, ammo kills 2 at Maryland mall, then self

UPDATE:  A bag tied to Saturday's Maryland mall shooter included "two crude devices that appeared to be an attempt at making explosives using fireworks," the Howard County Police Department said. These devices "were disabled," according to police.

(CNN) -- A gunman strapped with large amounts of ammunition Saturday shot and killed two workers at a busy Columbia, Maryland, mall before turning a shotgun on himself, police said.

The shooting, which also left five others injured, capped a violent week which saw shootings or gun scares at American schools or shopping centers -- ordinary places where people once felt safe.

"This should not happen at the Columbia Mall," Howard County Police Chief Bill McMahon told reporters. "This shouldn't happen anywhere."

McMahon told reporters that the shooter apparently fatally shot a man and woman -- both store employees -- before shooting himself in a store on the second floor of The Mall in Columbia. The motive was unclear.

Police identified the dead employees as Brianna Benlolo, 21, of College Park, and Tyler Johnson, 25, of Ellicott City. Both worked at Zumiez, a shop that caters to skaters, where the shootings took place.

The body of the unidentified suspected shooter was found near a shotgun on the floor of Zumiez, police said. A large amount of ammunition was found near the body, leading investigators to suspect that he might be carrying explosives. 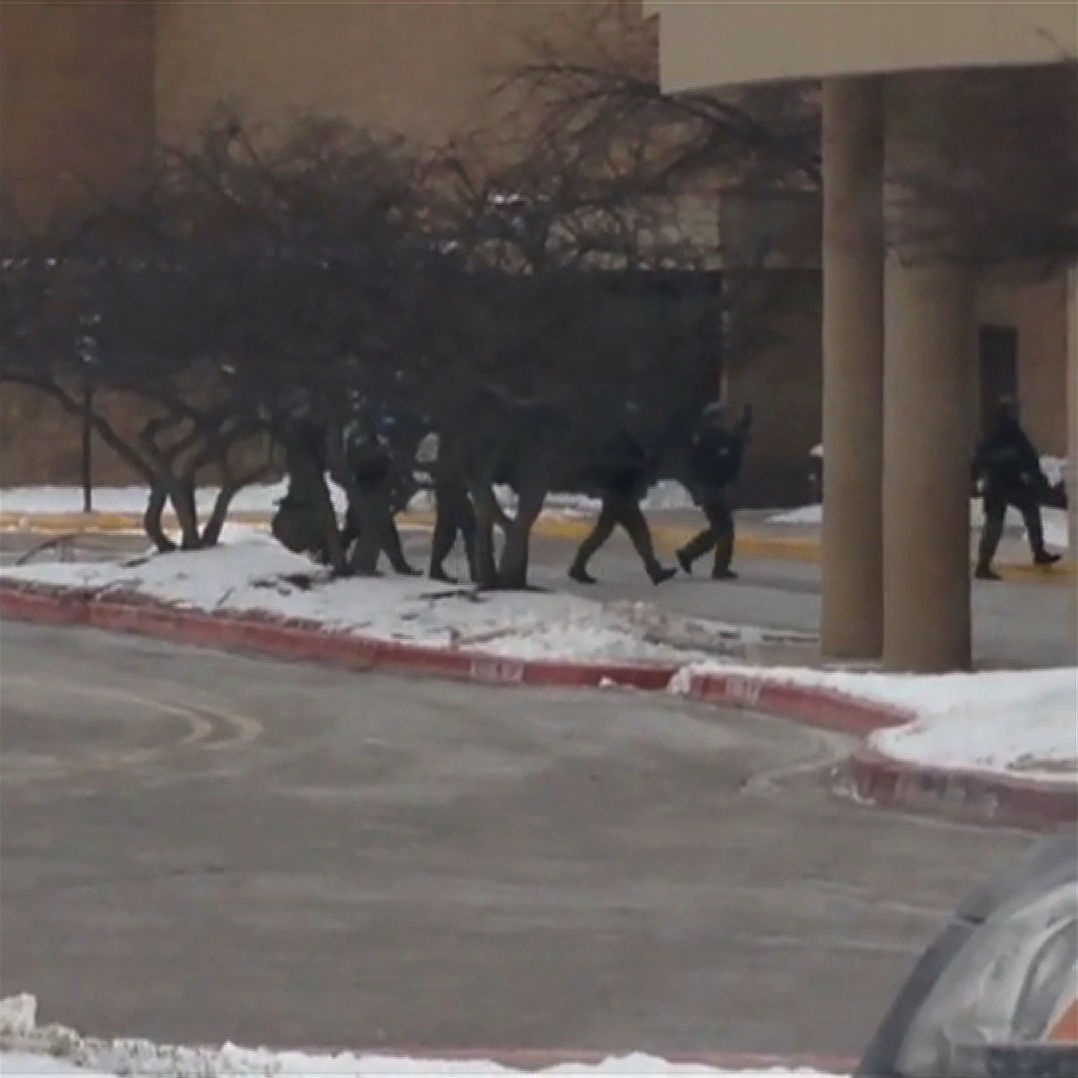 The first 911 call about the shooting came at about 11:15 a.m. and officers were in the mall within two minutes, police said.

The shooting "seems to have been very contained to that store and the area just outside," McMahon told reporters.

Gov. Martin O'Malley said in a statement: "On behalf of the people of Maryland, I want to express my deepest condolences to the families of the victims and all those affected by this senseless act of violence. Protecting the public's safety is our most solemn obligation."

Police entered the mall within minutes of the first 911 calls and found three people dead. The scene was secure shortly before 1 p.m., police said.

Investigators said there were thousands of people in the mall at the time, with many hiding in fear behind store counters, in restrooms or fitting rooms for hours after the shooting stopped.

"Think about this, on a Saturday afternoon at the mall, how many people may be in there," McMahon said. "Something like this happens and people run in many directions, and they also do what we train them to do -- to shelter in place."

A federal official briefed on the shooting told CNN that preliminary information indicates the shooting may have been related to a domestic dispute. Police, however, said haven't yet reached that determination, saying investigators have not even determined whether the shooter and victims knew each other.

"We have no knowledge of that," McMahon said. "We do not know yet what caused the incident."

Five people were transported to Howard County General Hospital, a hospital spokeswoman said in a statement. They were treated and later released.

One patient had a gunshot wound to the foot; the others suffered injuries after the shooting. McMahon said one person had a seizure, another a sprained ankle.

In a statement, management of the mall said: "Our hearts & prayers are with everyone in the Columbia community. The Mall in Columbia will remain closed for the remainder of the day . ... Please keep the community in your thoughts and prayers."

A statement from Zumiez, the store where the shooting occurred, said management was arranging counseling for other employees.

"We are deeply saddened by the violence that has occurred this morning within our store in Maryland at The Mall in Columbia," the statement said. "Our hearts go out to the victims and their families."

Employees told CNN the gunfire erupted near a second-floor food court in the late morning, sending shoppers and workers running for cover.

"It's a mall shooting," one mall worker, identified only as K.T., told CNN. "No one knows what's going on. In today's world, you hear gunshots and you run."

The staccato of gunfire was followed by the cries and screams of children and adults running or ducking for cover, the employee said.

"A lot of kids were crying, and mothers were holding onto them," K.T. said. "I wasn't worried about me. I was just making sure everybody was OK."

Once the shooting stopped, SWAT team members moved from store to store.

"It was just crazy," said K.T., who snapped a picture of a bullet-riddled wall near the shooting scene. "It's one of those things you see on TV but never expect you'll go through."

Colin Ready, another employee, said he heard a couple of booms and thought the sounds were from construction. Then, there were several more booms and people were screaming and scattering, he said.

The manager of the store where Ready works closed the front gate, he said. When a police officer, not in uniform, came to the gate later to say the mall had been secured, Ready said workers didn't believe he was a cop.

"I have never experienced anything like this in my life," she said. "I was standing there talking to a customer and I started hearing all this banging coming from the food court... and people started running and they said somebody's down there and they got a gun."

Near tears, she added: "This country needs a lot of help. When somebody is that angry to go to a mall on a Saturday morning and shoot people. We're in a lot of trouble... To push people to those limits where things like that happen makes no sense."

While McMahon spoke to reporters about two hours after the shooting, he said, SWAT teams and officers from various jurisdictions were still going store-to-store and evacuating people people who had taken shelter.

Images on Twitter reportedly from the scene showed mall employees and customers hiding in a stock room. The mall was on lockdown for some time.

In the moments after the shooting, the fire department, via Twitter, advised people to avoid the area.

"I'm terrified," said Lauryn Stapleton, a mall employee who barricaded herself in a room for an hour and half after the shooting."It's just somthing I never want to experience again. I'll go back to work but it will be hard."

Federal law enforcement officials said Saturday night that the Bureau of Alcohol, Tobacco, Firearms and Explosives is tracing the shotgun found with the shooter.

The mall shooting capped a week of gun violence or threats of it in ordinary places across the country.

A student was shot dead Friday afternoon at South Carolina State University, prompting a manhunt for several suspects that extended beyond the school's Orangeburg campus.

On Wednesday, the University of Oklahoma in Norman briefly shut down after a report of a possible shooting that apparently turned out to be a false alarm, the university's president said.

On Monday, a student was shot and critically injured near a gym at Widener University near Philadelphia. Police were looking for a suspect.

CNN's Evan Perez and AnneClaire Stapleton contributed to this report.

One subject dead is suspected shooter. No information about other victims yet.

Police are in mall to clear people out safely. Mall is believed to be secure, but people inside should wait for police.

Call came into 911 around 11:15 a.m. that shots were fired. Police made entry and found three dead, one found near a gun and ammunition.

There has been a confirmed shooting at the Columbia mall. a PIO will be on scene shortly. No updates or new details yet.