HANOVER, Va. (WTVR) - One week after her tragic death, online tributes and a roadside memorial continue to grow for Meg Menzies, a beloved Hanover wife and mother, killed by an alleged drunk driver while running last week .

Over the weekend, 90,000 runners world-wide pledged to tack on miles for Menzies, a stay at home mom and the wife of an Ashland police sergeant.

Ed Deiss, a Hanover resident who never met Menzies, stopped by her memorial on Patrick Henry Road to pay his respects. 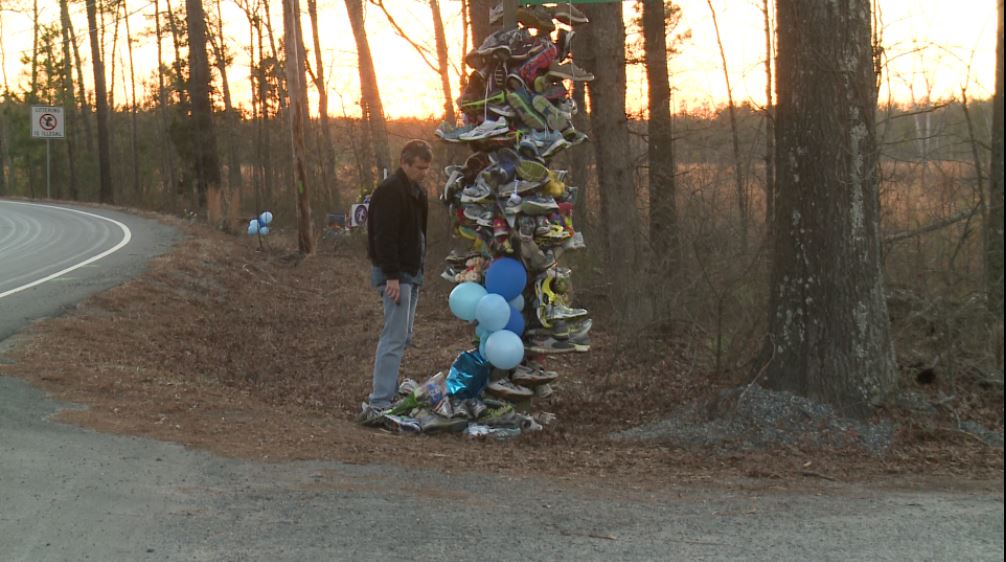 “I’m not a runner by any means, but she definitely carved her name in a lot of hearts,” Deiss said. “I was honored to run on Saturday for Meg.”

As condolences from across the globe continue to pour in, there are still several questions surrounding the Hanover physician charged in connection to Menzies' death.

Was Dr. Michael J. Carlson, age 47, drinking the morning of the accident or had several hours passed since his last drink, as he alleged in court documents?

Carlson, a Bon Secours internist, is charged with involuntary manslaughter and DUI.

He is currently battling Leukemia and lost his own wife in a tragic car accident 10 years ago.

The Carlson family was awarded a $20-million settlement based on the negligence of another driver, who hit Carlson’s car head-on while the family was in Buffalo, New York visiting relatives.

He has custody of his three children and cares for his fiancee’s two children.

According to his arrest warrant, Dr. Carlson told a Hanover County officer that he had not had a drink since 10 p.m. the previous night and was on his way to work when he became distracted by the radio and veered off the road.

However, the officer observed that Carlson “had a moderate odor of alcoholic beverage.” The officer also stated Carlson’s eyes were red and his speech was slurred.

According to court documents, Carlson had a BAC of .11 at the time of the accident.  The legal limit in Virginia is .08.

“They’re trying to do the right thing,” defense attorney Ed Riley said.  “They get up in the morning at six or seven and they’ve stopped drinking at midnight and they’ll still be under the influence.”

According to toxicologists in his book, the average rate in which a person eliminates alcohol is .010 to .017 per hour.

For example, a man who eliminatesdalcohol at a rate of .010 per hour, will take 10 hours to reach a BAC of .000. However, a similar man with an elimination rate of .015 per hour, could purge alcohol from his body in seven hours.

Several factors influence the rate of elimination, including a person’s weight, gender and the amount and type of alcohol they consume.

A person’s health, especially if they have a compromised liver, can also slow the process of elimination by several hours.

“The bell curve that you’d expect in a healthy person won’t necessarily occur with someone who might have a health problem,” Riley said.

Was this the case with Dr. Carlson?  Should he have known better as a physician?

These are questions, Riley said, a jury must decide although Virginia’s DUI laws leave little room for discretion.

“These are some of the hardest cases you’ll ever deal with,” Riley said.  “There are no winners here.”

Carlson is expected back in Hanover court in April.  He is currently out of bond.

Under the judge’s order, Carlson is not allowed to drink alcohol and must wear a SCRAM bracelet, which lets the court know if a person has been drinking alcohol.

Seating an impartial jury will be difficult if the case goes to trial, according to lawyers who spoke with CBS 6. Both Menzies and Carlson were well known and respected members of the Hanover community. Both the victim and defendant are the parents of three children.

Menzies' supporters hope to spread awareness about drunk driving and the innocent lives that are destroyed when someone gets behind the wheel after consuming alcohol.