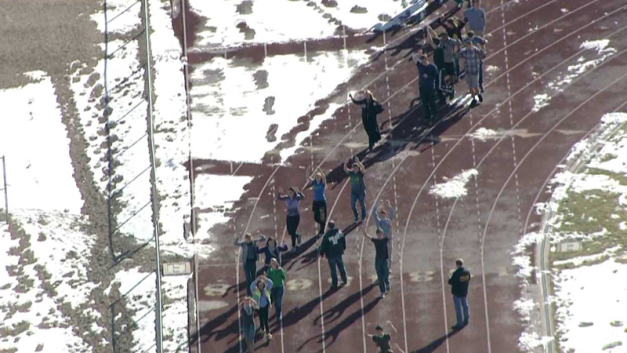 CENTENNIAL, Colo. —The suspect in the shooting at Arapahoe High School is dead of what appears to have been a self-inflicted gunshot wound, Sheriff Grayson Robinson told reporters.

Arapahoe County Sheriff’s office has confirmed at least two individuals were injured during a shooting at Arapahoe High School on Friday afternoon.

The dead gunman was a male student at the high school, Sheriff Grayson Robinson told reporters. He declined to identify the student.

“We have not been able to locate a second suspect, but that’s part of our ongoing investigation,” the sheriff said.

The shooting began after the student entered the school and identified a teacher whom he wanted to confront, Robinson said. That teacher was informed of the situation and exited, he added. One student was taken to a hospital in serious condition with a gunshot wound; another was injured, though the cause was not clear, he said.

All schools in the area were on lockdown.  The high school, with a student population of 2,229 students, has 70 classrooms. The school, which was built in 1964, is part of the Littleton Public Schools system.

This shooting comes  a year after the Sandy Hook elementary shooting in Newtown, CT, which happened Dec. 14, 2012. Shooter Adam Lanza allegedly killed 20 children and six adults at the school, and his mother was found murdered at their house.

Columbine High School is nearby, also in the Littleton school district. Two seniors at the high school killed 13 people on April 20, 1999, before taking their own lives. A total of 24 other students were injured and explosives were located on the scene.

The school is located at the intersection of South University Boulevard and East Dry Creek Road.

Dozens of children could be seen walking away from the school, with their hands in the air. Some stood in lines at what appeared the high school track field, where they appeared to be undergoing police pat-downs.

Read more on KDVR, our sister station in Colorado.