He is the man police said set a Chesterfield home on fire, according to Chesterfield County Fire and EMS Lt. Jason Elmore.

Three children, ages 17, 14 and 11, inside the house when the fire started made it out alive.

"Jones had recently stayed at the residence and is known to the victims," police said.

The children told Chesterfield investigators Jones walked up to the Ravensbourne Dr. home, kicked in the door and threw a device. That device contained an accelerant that helped the fire spread, investigators said. The device was likely on fire when it was thrown into the home, Lt. Elmore added.

Investigators searched for Jones in the woods around the home off Hickory Rd., in southern Chesterfield County, but did not initially find him.

"Investigators have obtained warrants for Jones for arson and threats to bomb or damage building," police said.

CBS 6 has learned that Jones does have a criminal past.

In 2010, Jones was arrested and convicted on two burglary charges and was sentenced to forty years in prison.

But 37 of those years were suspended, meaning Jones was lawfully on the street Wednesday.

"Anytime someone is convicted of a felony there almost always going to have a suspended sentence," CBS 6 legal analyst Todd Stone said.

Stone added however that if Jones ends up having anything to do with what police say happened Wednesday, expect all that suspended time to be reinstated before any trial regarding any new charge takes place.

"A suspended sentence is always conditioned on good behavior so if you violate any of those terms you can serve any amount of that suspended term," Stone added. 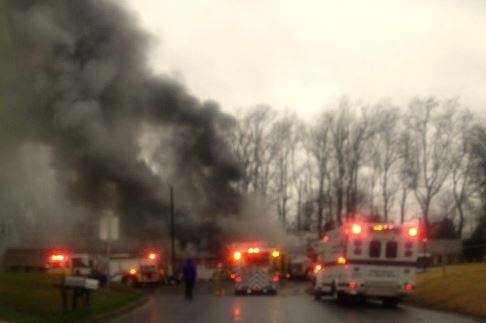 Elmore said Jones had a relationship with someone living in the home, however details of that relationship were not yet being released. That person was not home at the time of the fire.

The fire was reported at 9:18 a.m. It took crews about 34 minutes to bring the fire under control, Lt. Elmore said. The house is considered unlivable due to the fire damaged it suffered.