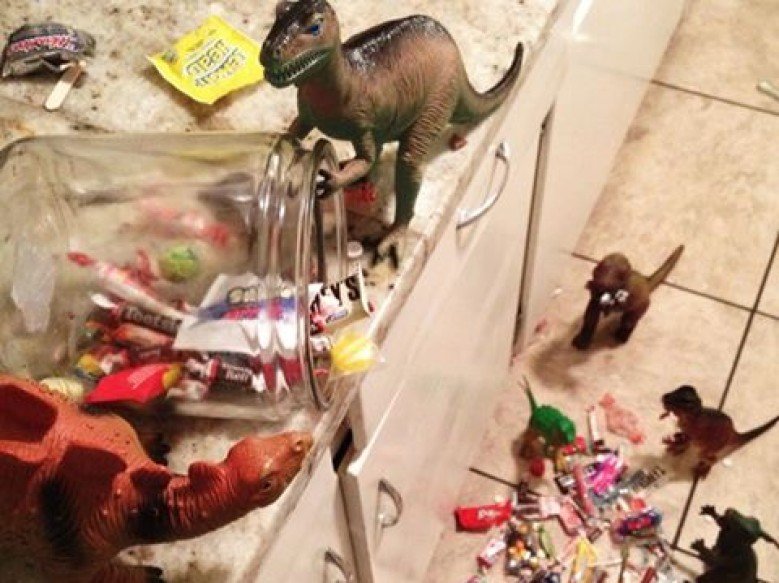 (HLN) — Watch out, Elf on the Shelf. A Kansas City, Missouri, couple’s project, “Dinovember,” could just be the most magical farce this fall.

Refe and Susan Tuma told HLN they are spending the month of November trying to convince their daughters that, while they sleep, plastic dinosaurs wreak havoc in their home.

The Tumas stage the dinosaurs in hilarious and often naughty situations — including fixing themselves midnight snacks and doing ketchup keg stands — and Susan photographs the scenes. The couple calls it a “month-long imagination invasion,” and their movement is picking up steam on Facebook and Twitter, with the hashtag #dinovember.

Refe Tuma, a Kansas City writer, and his wife say their children’s reactions to the project have ranged from shock to delight. After one “incident” in early November in which the prehistoric pranksters allegedly spray-painted dino cartoons on the living room wall, the couple’s 6-year-old suggested the family needed to have a garage sale and sell the toy dinosaurs.

Delighted parents and teachers are now posting their own dino hijinks on the couples’ Facebook page, which has more than 217,000 likes. Fans are checking out the page to get inspiration for their own daily dinosaur poses.

The Tumas said all it takes is time, creativity and a few plastic dinosaurs to help kids experience a little wonder and mystery each day. The couple started small, posing their dinosin the bathroom sink, then they moved to the kitchen table. But once they hatched an idea to have the dinosaurs throw eggs, things got messyand no room in the house was safe.

The couple says the Dinovember project will last as long as their children’s enthusiasm does. “They do love it, and we’ll do it as long as they do,” said Refe Tuma.