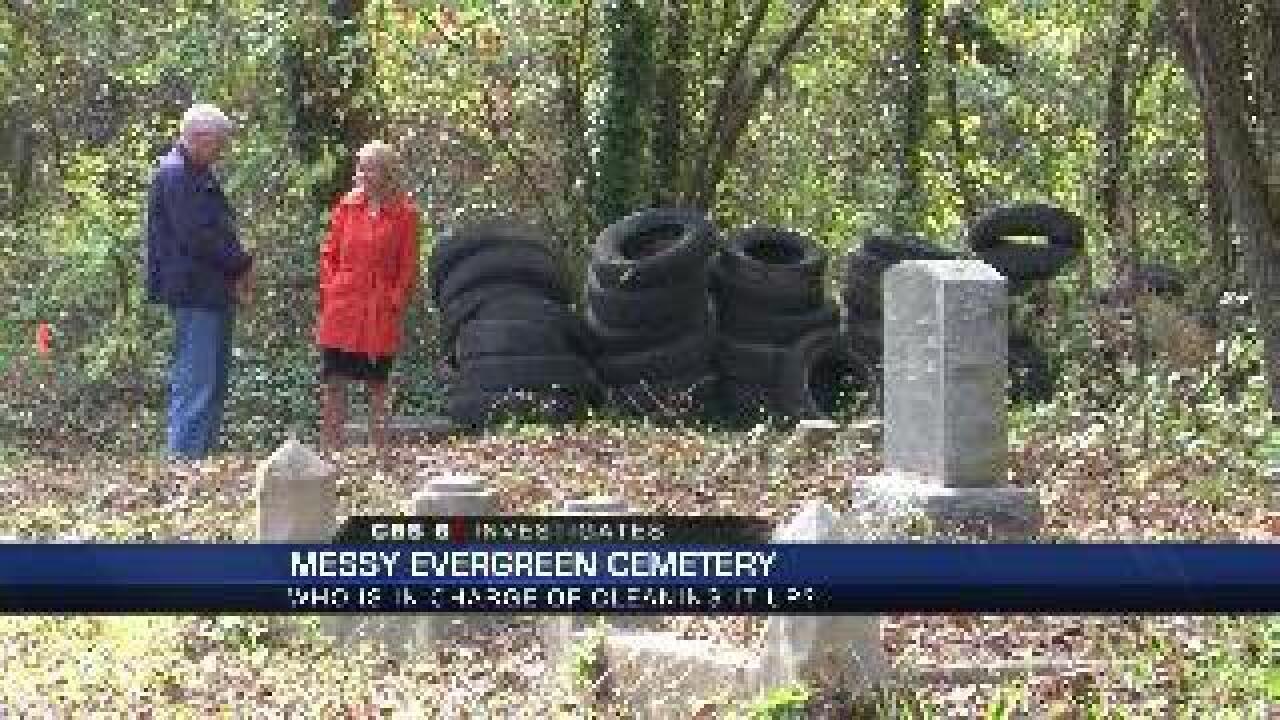 It’s the final resting place to some of Richmond’s most notable African Americans, including Maggie Walker, John Mitchell Jr., and Rev. Andrew Bowler.

Yet the Evergreen Cemetery is overgrown with weeds, vines and brush.  Some graves are broken or missing while others are completely covered in debris.  Military markers, never placed on graves, are stacked next to a tree.

Just outside the cemetery gates, there’s trash and debris, including tires, old electronics, mattress pads, even a couch.

While the privately-owned cemetery is historic, it’s exempt from a city law enacted in 1919 that requires all new cemeteries to provide perpetual care in the price of a burial plot.  Therefore grave maintenance at Evergreen Cemetery falls on the shoulders of family members.

For the past five years, John Shuck and his non-profit group have volunteered most of their weekends to clear debris and brush from the old cemetery, as well as trash, but a dispute with the private cemetery’s owners has forced the group out for now.

“I’d hate to see our five years of work go down the drain,” Shuck says.

Shuck says up until July, volunteers were able to clear about three of the cemetery’s 60 acres.  He says since the group is no longer allowed to work in the cemetery, it’s focusing its efforts on the East End Cemetery, an abandoned graveyard just feet from Evergreen in Henrico County.

Over the weekend, a viewer sent CBS 6 pictures of some of the debris inside and just outside the Evergreen Cemetery’s gates.

Shuck says volunteers, including several students, are working to maintain the area outside the graveyard.   He says more volunteers and equipment is needed to help breakdown and haul away debris.

While Shuck says progress is slowly being made at the East End Cemetery, he fears things will get worse inside the gates of Evergreen if the dispute is not worked out soon.

“You can see in Evergreen, where we stopped three months ago, the weeds are almost as tall as me,” Shuck says.

As of airtime, the owner of Evergreen Cemetery did not return phone calls inquiring about current maintenance at the historic graveyard, in absence of the volunteer group.