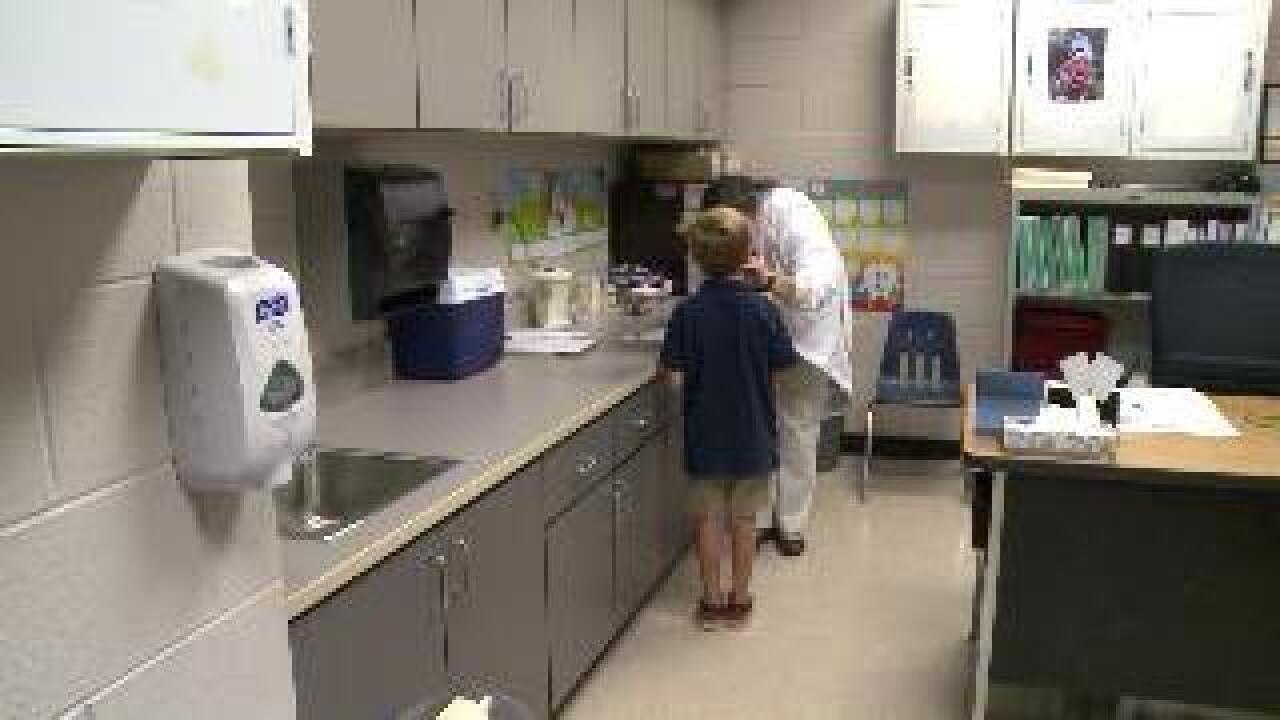 RICHMOND, Va. (WTVR) - All Central Virginia schools are not equal when it comes to student health care. While Hanover County Public School staff each one of its 23 schools with a registered nurse (RN) during school hours, other Virginia school systems do not.

That is one reason why Catherine Martin decided to pull her daughter Lily out of  Chesterfield County Public Schools. Martin said a series of medical mistakes made by a nurse's aide at her daughter's school pushed her to make the move.

As a Type 1 diabetic, if Lily's blood sugar levels get too high or too low she can sustain organ damage, lose consciousness, go into shock and die. While Lily was under the care of an RN for part of the school week, Martin said a nurse's aide, with far less training than an RN, was Lily's regular caregiver at school.

While she was not an RN, the school district said the aide was thoroughly trained in insulin and glucagon administration and other medical skills.

"I would say in the first week of school, making two life-threatening mistakes would raise some suspicions about what actually went on and if they are indeed proficient," Martin said about what happened to her daughter Lily.

Jessica Smith had similar concerns about a different nurse's aide at her son's Henrico County elementary school. She said Tate, 5, was twice given incorrect insulin doses the first week of school.

"I understand she made a mistake, we all make mistakes but at the same time, the kind of mistakes she made, the kind of confusion that she has, the kind of fear she's exhibiting- is dangerous- not  only for my son, but all the other children in the school," Smith said.

The nurse's aide in question has since been removed from the school and replaced by an RN, according to Smith. Henrico Schools officials said the county planned to place an RN at every school by 2016.

Nursing advocate Becky Bowers-Lanier said for many Virginia school divisions, having a registered nurse in every school is not an option, or even a priority.

She said in many schools, caregivers inside school clinics are nurse's aides, secretaries, administrators, and even parent volunteers. Most, she said, do not have a four-year degree in the medical field. She said many have only the training or certifications required to be renewed either once a year or every other year.

"These are specific tasks we teach them," she said. "They don't necessarily understand the pathophysiology behind what they're seeing."

Virginia law mandates every school have at least three people trained or certified in COR, first aid and the use of automated external defibrillators. At schools with diabetic students there must also be two people trained in insulin and glucagon administration.

The recent peanut allergy-related death of Chesterfield first grader Ammaria Johnson prompted a change in state law that requires schools to keep epinephrine on hand in case a student suffers an allergic reaction.

Along with the epinephrine, staff must undergo training on how to deliver the life-saving medication. Still, it is up to individual school districts to enforce those rules.

"Do you have any enforcement capabilities to make sure school districts are doing what they're supposed to be doing?" asked CBS 6 reporter Tracy Sears.

"No. We don't have any oversight ability," Tia Campbell, a school health specialist with the Virginia Department of Education, replied.

Campbell said the amount of money Virginia school systems received to hire and train school nurses is based on population.

How many nurses each school division hires and how much money those nurses are paid remains up to each individual school district.

"Only about 35 of our 132 school divisions are paying RN's on the same salary scale as teachers, and that's a big issue,"  Campbell said.

Back in Chesterfield, Catherine Martin said she and her husband have spent $23,000 in legal fees fighting Chesterfield County schools to release training and certification records and personnel files related to their daughter’s former caregivers.

The school system said the files were confidential, but maintained their policies ensure students like Lily are never in any danger.

"The people in place responsible for this have not responded at all and are still at the helm- that’s terrifying,” Martin said.

Martin said she will continue to fight along with other families until they feel the lives of children are no longer at risk in Virginia's public schools.