WASHINGTON (CNN) -- A shaky video captured only a few moments of William D. Swenson's actions during a brutal, hours-long battle in Afghanistan: Kissing a badly wounded comrade on the forehead as he helped load the soldier into a helicopter.

"This may be the first time we bear witness to a small portion of the action" of a Medal of Honor recipient, President Barack Obama said Tuesday as he awarded the now-retired Army captain the nation's highest military honor for his actions in the Ganjgal Valley in 2009.

Swenson, 34, of Seattle, became the sixth living receipt from the wars in Iraq and Afghanistan to receive the honor, and it is only the second time in a half-century that two men from the same battle have been awarded the medal.

Swenson, who retired from the Army in 2011, is being awarded the medal for his actions on September 8, 2009, in the Battle of the Ganjgal Valley in Afghanistan's Kunar province. The battle claimed the lives of four American soldiers, 10 Afghan soldiers and an Afghan interpreter. 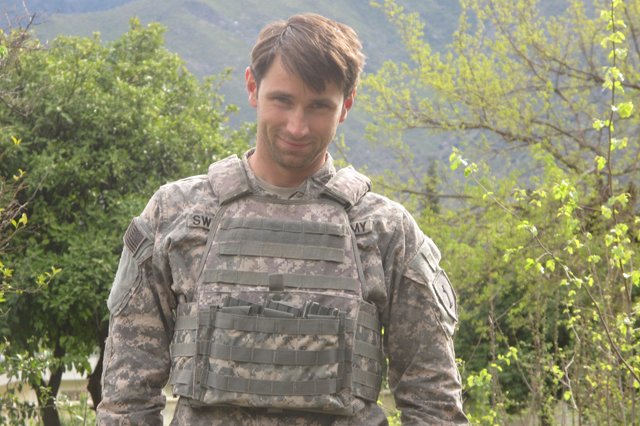 Swenson was working with Afghan security forces in the volatile Kunar province near Pakistan's border when he and his troops came under fire.

Obama recounted to an audience of fellow soldiers and families of the fallen how Swenson braved enemy fire again and again to recover the bodies of the dead Americans and Afghans.

"In moments like this, Americans like Will remind us of what our country can be at its best, a nation of citizens who look out for one another, who meet our obligations to one another not just when it's easy, but also when it's hard," Obama said. "Maybe, especially when it's hard."

Part of Swenson's rescue efforts were recorded by a rescue pilot's helmet camera. In the heat of battle, with bullets flying and dust blocking any clear vision of the surrounding situation, Swenson is seen helping Westbrook, who had been shot in the throat, back to a helicopter.

After placing him in the helicopter, Swenson bent down to kiss his forehead before running back to the battle to retrieve other fallen Americans and Afghan fighters.

The road to this honor has not been easy for Swenson, whose nomination was "lost" for a time, prompting questions from lawmakers and an eventual internal Pentagon investigation.

Swenson spoke out after the 2009 battle, criticizing his leadership for failing to provide him with adequate air support after multiple radio requests. The Army later backed up his claims, reprimanding two commanding officers.

The nomination statement, once found, was nothing short of glowing for Swenson, saying the soldier "braved intense enemy fire, and willfully put his life in danger against the enemy's main effort, multiple times in service of his fallen and wounded comrades, his unit, his country, and his endangered Afghan partners".

Dakota Meyer, a Marine, was honored for his actions in the same battle in 2011.