VOTE: Does this Halloween display go ‘too far?’ 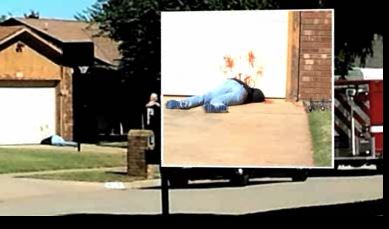 MUSTANG, Okla. (KWTV) –  A Halloween prank is putting neighbors in a panic in Mustang, Oklahoma. Johnnie Mullins decided to get “gruesome” this Halloween. His yard features gravesites and ghosts up in a tree, but the real shocker is the fake dead body in the driveway.

“Just trying to scare people, that’s what I like to do,” Mullins said.

The dead body is placed in such a way that it looks like the garage door crushed its head.

“My heart about came out of my chest. I thought ‘Oh my God,'” Rebecca Fuentes, who hopes Mullins gets rid of the body, said. “If I think it’s real, just think of what a child would think?”

“The kids that live in the neighborhood don’t freak out or anything. I’m sure they do at first,” Mullins said.

The fake body even prompted a 911 call. Police and firefighters responded.

Mullins was told he wasn’t breaking any laws and will continue to keep the phony body in place. In fact, he is adding another body that appears to have been run over by a truck.

Do you think Mullins went too far? Click here to email us your thoughts or leave your comments on the WTVR CBS 6 Facebook page.