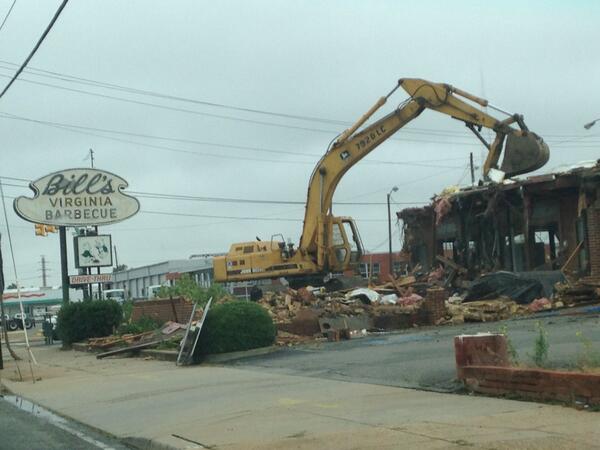 RICHMOND, Va. (WTVR) – The Bill’s Barbecue on Boulevard near the Diamond in Richmond is now a pile of rubble. Demolition on that location of the iconic local restaurant began this week.

Charles Metheny, with Metheny Contracting, said he expected the demolition project to be completed sometime next week.

In addition to tearing down the building, Metheny is also trying to sell the restaurant’s sign – which can be divided into three smaller signs.

The Varina native said even through he frequented Bill’s while cruising Broad Street in the 1980s, tearing down this location was just another job.

“I’m a believer in the North Boulevard corridor,” Williams said in a phone interview.

He added he was in negotiations with a region/national food chain over the Bill’s Barbecue at Libbie Ave. and Broad St. He suspected that property would be torn down and rebuilt next year.

At its height Bill’s Barbecue boasted 13 locations, Greg McQuade reported in 2012.  Five restaurants closed in April of that year to try to save the company, which began in Norfolk in 1930. The final three locations in Richmond closed in September 2012.