HENRICO COUNTY, Va. (WTVR) – Police are looking for the man who used a “master key” to steal from guestrooms at a Glen Allen hotel.

“Detectives are working to determine how the key was obtained,” Henrico Police wrote in a media advisory. “A laptop computer was stolen from one of the guest rooms.” 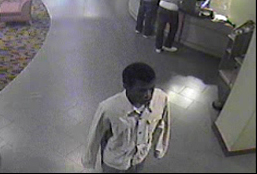