Instead, the motorist's black Infiniti, according to authorities, itself became a weapon Thursday afternoon, first striking a security barrier and U.S. Secret Service officer near the White House before hurtling down some of the capital's most famous streets, police cruisers in pursuit.

Dramatic video taken minutes later near the U.S. Capitol showed the vehicle backing into a police vehicle before the chase resumed. Gunshots rang through the traffic circle. The motorist was shot by police just a few blocks away.

The woman died. The child was safe and in protective custody. Two officers were injured. Police vehicles were damaged.

And a city heretofore fixated on a partial government shutdown was left with unanswered questions.

Why did this happen? Why did the woman drive away from the White House and toward the Capitol?

While U.S. Capitol Police Chief Kim Dine said there appeared to be no evidence of terrorism, Metropolitan Police Department Chief Cathy Lanier said, "This does not appear to be in any way an accident."

Officials, who called it an "isolated incident," were tight-lipped about the suspect and did not name her at an evening briefing.

Multiple police sources and publications have identified the woman as Miriam Carey, a 34-year-old dental hygienist. A search warrant was executed  at a residence in Stamford, CT.

The early hours of the investigation turned northward Thursday night.

Authorities wanted to speak with the suspect's relatives in Brooklyn, New York, but were turned away, federal law enforcement sources told CNN.

The chase created a chaotic scene of blaring sirens, locked-down lawmakers and bystanders hitting the dirt.

House and Senate sessions were immediately suspended, with legislators ordered to take cover and keep away from windows. Police also closed Pennsylvania Avenue in front of the White House.

The chase began near the White House.

A U.S. Secret Service source said when the woman drove up to a barrier at the 15th and E street checkpoint, she was approached by Secret Service officers who did not recognize her car.

The motorist hurriedly tried to drive away, executed a three-point turn, struck the barrier and backed into an officer before driving away, the source told CNN.

Police said the car sped down Pennsylvania Avenue toward the Capitol, where security vehicles stopped it at Garfield Circle.

Frank Schwing, a Washington resident who was near the area, said officers "came out with their guns drawn" and approached the suspect's vehicle.

Video footage by other witnesses showed the black vehicle then careening around a nearby traffic circle with a police car in close pursuit and then headed away. Shortly afterward, the black car crashed into security barriers a few blocks away, witnesses said.

Lanier said more shots were fired after the vehicle stopped, and the woman was hit several times. The driver was later pronounced dead, Lanier said.

According to multiple sources, there was no reason so far to believe that the woman fired any shots or even had a weapon. Officers did not know a child was inside during the chase, officials said.

Lanier, citing the lengthy pursuit, rammed vehicles and an attempt to breach two security perimeters, said the driver's actions did not appear to be accidental.

"They did exactly what they were supposed to do," she said. 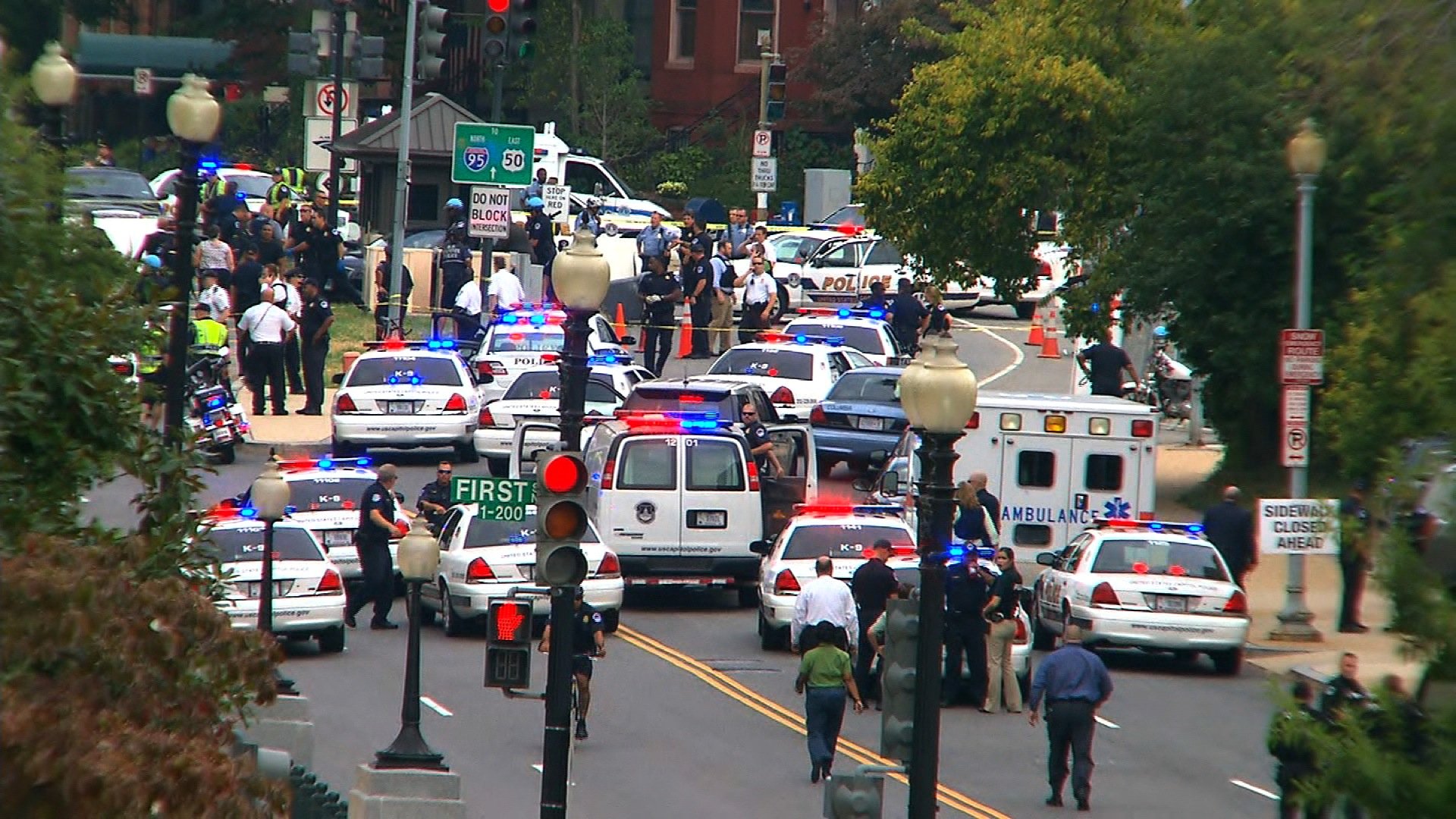 A Capitol Police officer whose vehicle crashed during the chase also was hurt, authorities said. The officer was released from a local hospital Thursday night. The Secret Service did not release information about its injured agent.

Authorities lauded the action of police -- some of whom aren't being paid -- who responded to the incident.

Because of the government shutdown, U.S. Capitol Police aren't receiving a paycheck, although they will receive checks once appropriations are restored.

In Congress, a Capitol Police bulletin said reports of gunshots required "all occupants in all House office buildings to shelter in place."

"Close, lock and stay away from external doors and windows," the bulletin said. Authorities later lifted the lockdown, with police saying they believed the incident was isolated.

President Barack Obama was briefed on the situation, which occurred on the third day of a government shutdown due to a stalemate in Congress over government funding.

"The timing on this was really kind of scary," said Republican Rep. Blake Farenthold of Texas. "Capitol Hill police are at a lower personnel level because of the shutdown."