Tradition has it that each year a local artist is selected to make a festival poster. The newest addition to this noble series was created by wife and husband duo Bri Bevan and Jay Frank, Fredericksburg natives who moved to Richmond in 2001, when Bri entered the VCU School of Arts.

In 2009, a blessing disguised as Jay’s corporate job lay-off  made for a colorful transition into screen printing. At first the process was a hobby, a remedy in a sort-of anxious time. Yet within a year Bri had left her job and joined Jay in the studio, and Itty Bitty Press flourished.

Now they make art all the time, with a focus on promotional show posters, for venues like the National or the Friday Cheers concert series. It seems natural that Venture Richmond would approach the couple with an opportunity to record a little piece of Richmond’s cultural history.

After all, the couple already passed the test of designing the Friday Cheers night dedicated to the River City’s legendary Ralph White. 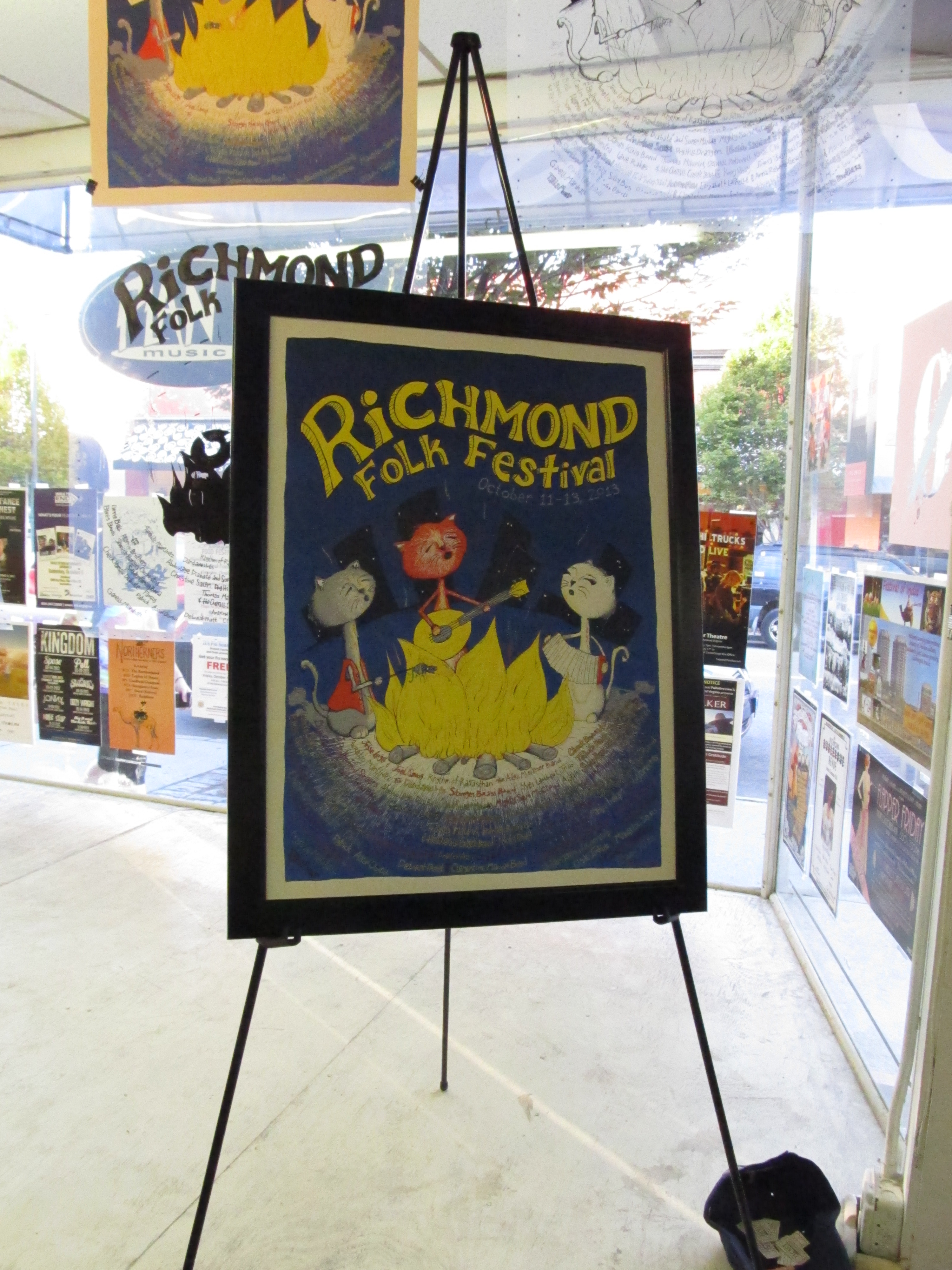 “We find it funny to find how the different animals fit into the scenes we are doing,” Bri said about their love of anthropomorphizing animals. They chose between the concept of a bear getting tattooed at the Folk Festival and the fireside folksy feline crooners.

“We thought, ‘hey, cats are musical,’ and they fit in with that folky, they could be a hobo with a banjo on their back, traveling around image—you know, they’re very independent.”

It’s complete serendipity that their masterpiece was the ninth in an esteemed line of posters—you know, since cats have nine lives.

Every artist certainly brings their own style to the poster.  This one is a fun departure from the traditional, straight forward folk event posters of the past (All beautiful by the way–scroll below to see the other eight). They certainly do consider it an honor to be tapped for the task, Bri noted that they “feel accepted by the art community.”

Plenty of artists were certainly there to congratulate the couple, who explained the technical five-color screen print process to the crowd, a proof from each phase hung around the final product to demonstrate the meticulous process. All in all, it was about a month from concept to completion.

The countdown is on for the festival, with two weeks left until tens of thousands of fans flood the city for riverside performances. You will have the chance to buy a poster print for five dollars, and the design will be on shirts as well.

Right now, 100 limited edition screen print posters are available at Plan 9, for $20, until supplies are gone. The music store also carries official Folk Festival merchandise online and in the shop.