Benghazi hit by blast on anniversary of attack on U.S. Consulate 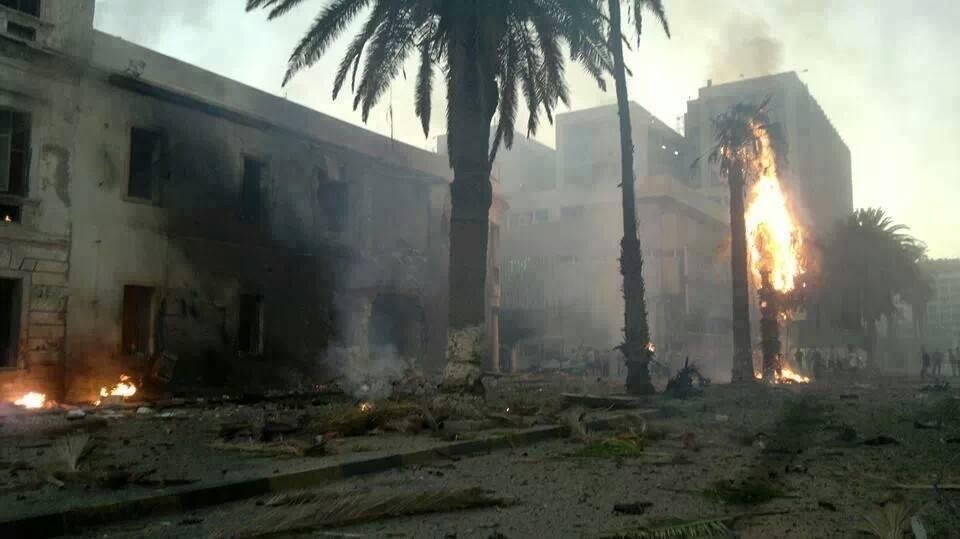 (CNN) — A car bomb exploded outside a Foreign Ministry building in the Libyan city of Benghazi Wednesday, state media said, on the anniversary of an assault on the U.S. Consulate there that killed four Americans, including Ambassador Christopher Stevens.

The blast did not cause any casualties but blew away large parts of the building’s facade, said Col. Abdullah Al Zaydi, spokesman for the Joint Security Task Force in Benghazi, according to Libya’s state news agency, LANA.

Al Zaydi said the explosion was very powerful and destroyed the vehicle used for the bombing, which contained a large quantity of explosives, the news agency said.

The blast also damaged a branch of the Central Bank of Libya and slightly injured one of its security guards, the bank said.

The branch director, Abdel Qader Mohammed, said the explosion caused “material damage” to the building, but its computer systems were not affected.

Benghazi resident Sami Berriwen told CNN he heard the blast in the eastern city at about 7 a.m.

Berriwen, a university student, said that if the explosion had happened just an hour later, the street would have been full of people. He said most Benghazi residents walk the street to get to school and to work, but because it was early, no one was out yet.

Berriwen said he saw a fire truck but no casualties or ambulances at the scene.

Diplomatic missions and security officials have repeatedly been the targets of attacks in Benghazi, leading most Westerners to leave.

In January, gunmen targeted the car of the Italian consul general in Benghazi, but no one was injured. Bomb attacks also occurred last year on a U.N. convoy, as well as on a convoy carrying the British ambassador. In November, unknown gunmen assassinated the city’s temporary security director.

Other towns and cities, including the capital, Tripoli, have also seen frequent attacks.

In recent days, scores of U.S. Marines were moved closer to Libya to help beef up security before of the 12th anniversary of the 9/11 terrorist attacks on the United States and the first anniversary of the attack on the Benghazi consulate.

Two U.S. officials told CNN on Monday that 250 combat-ready Marines had moved from their base in Moron, Spain, to the U.S. naval installation at Sigonella, Italy. That would enable them to reach Tripoli in three to four hours in the event of a crisis.

Other U.S. forces are helping boost security at various embassies in the region, since the period around September 11 is seen as a time of greater threat to U.S. interests.

The attack at the Benghazi compound has been a political flashpoint in a long-running battle between the administration and Republicans, who accuse it of not bolstering security before the attack, of botching the response to it and of misleading the public for political gain before the November 2012 election.

A report by the U.N. secretary-general on the U.N. Support Mission in Libya, released this month, highlights the continuing security concerns and political polarization in Libya following the overthrow of strongman leader Moammar Gadhafi in 2011.

The status of the revolutionary fighters who helped to oust Gadhafi remains unclear, the process of transitional justice is almost stalled, the country’s borders are leaky and there are many unsecured weapons, adding to the instability, it said.

“The continuing volatile security situation in Libya in general, and in the eastern and southern parts of the country in particular, is a source of grave concern,” it said.

“Targeted political assassinations, criminal activity and attacks and threats against the diplomatic community continue to plague the country, including Tripoli. The protection of the civilian population and the enforcement of law need to be reaffirmed as a national priority.”