RICHMOND, Va. – As a third-party candidate with a lack of funds and public attention, Robert Sarvis is going above and beyond to bring awareness to his campaign for governor of Virginia. The Libertarian Party candidate said he put 12,000 miles on his van, just driving around the state to talk to voters.

On Friday, Sarvis made his stop in Richmond’s Shockoe Slip. On the corner of 12th and East Cary streets, Sarvis tirelessly tried to remind voters that they have another option in the gubernatorial race besides Republican Ken Cuccinelli and Democrat Terry McAuliffe. 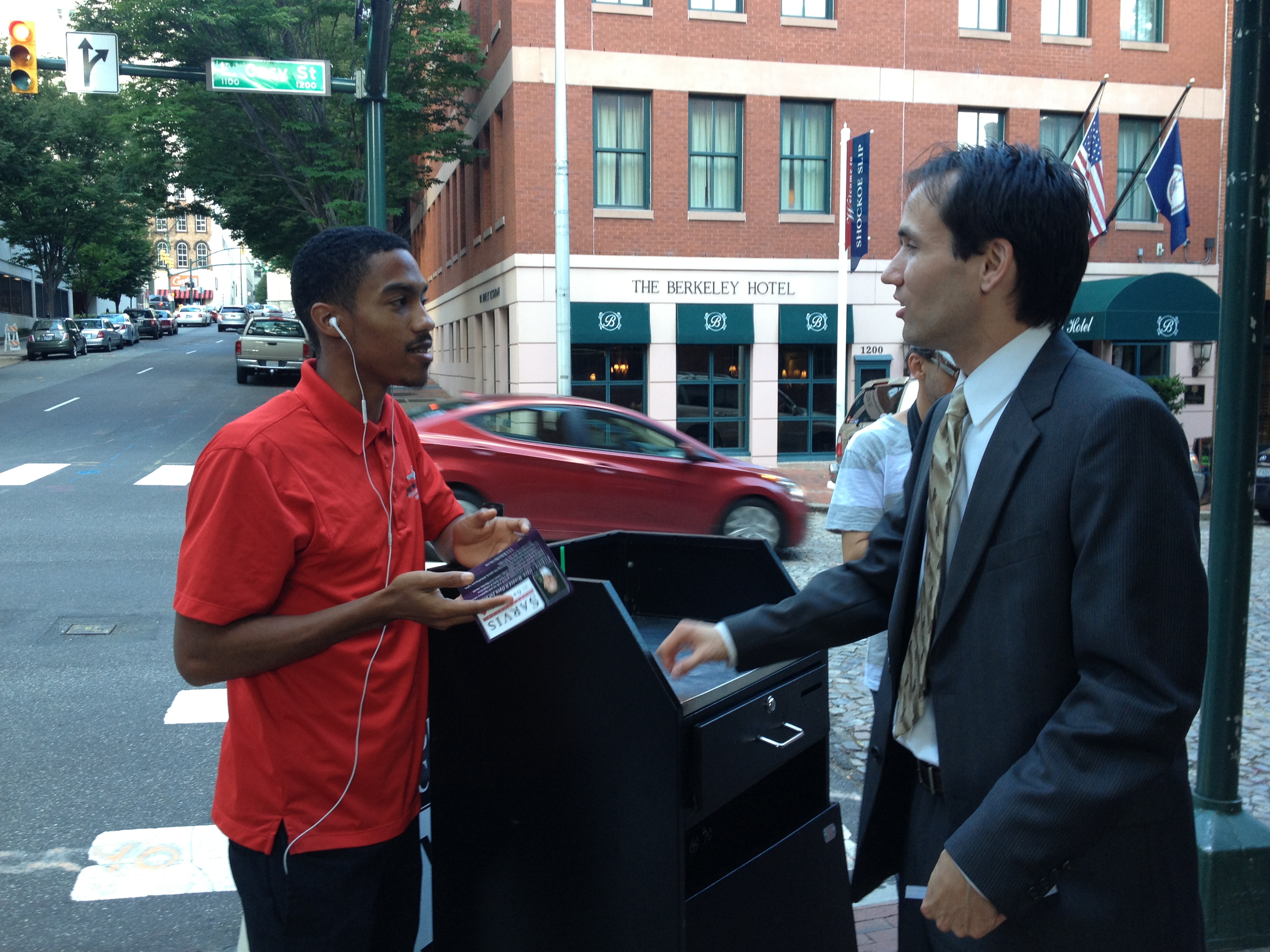 Sarvis’ supporters are also planning a sign waving prior to Saturday’s NASCAR race at Richmond International Raceway in hopes to attract more attention to the campaign. In Shockoe Slip, Sarvis directly talked to voters and handed out small fliers promoting his platform on issues such as marriage equality and protecting gun rights.

“I’m here to both meet a lot of voters and to spread my message through media contacts,” Sarvis said. “I’m here to meet as many voters as I can.”

Sarvis said that awareness was the biggest challenge he has faced so far in this election. He added that his campaign sells itself once people know about his interest in having an “open-minded and open-business Virginia.”

Previously, Sarvis was a Republican candidate for the Virginia State Senate in 2011. He left the Republican Party following his loss, citing differences in ideology in regards to personal liberty.

“I think the Republican Party cannot be trusted on economic issues like keeping taxes and spending low, but also on personal issues they are very regressive and they are trying to force a regressive ideology on all of us,” Sarvis said. “I’m the only person who is focusing on letting you live your life as you see fit and you running your business as you see fit.”

He also thinks he is different from Democrat Terry McAuliffe, claiming that McAuliffe is “the poster child of crony-capitalism and the idea that the government should be choosing winners or losers.”

In conversations with voters in Shockoe Slip, Sarvis seemed to strike a note. Jonathan Briley, a student at Virginia Commonwealth University, was one of the people Sarvis spoke to. He did not know that Sarvis was a candidate in the gubernatorial race.

“When I was talking to him, he looked me in the eye,” Briley said. “He did not seem like a jerk or a person who was out for his own interests. He looked like he was in tune with what a lot of people were saying.”

Sarvis admitted that he has challenges ahead of him over the next several weeks. He thinks his biggest challenge is getting his message out. He said he would reach out to as many voters as possible and try to get more media exposure. Both are challenges for most third-party candidates.

“I am going to continue to do what I have been doing, talking to voters,” Sarvis said. “We are running a mainstream campaign, with mainstream issues and real solutions.”

By Alex Carrigan and Whitney Muse (Special to WTVR.com)