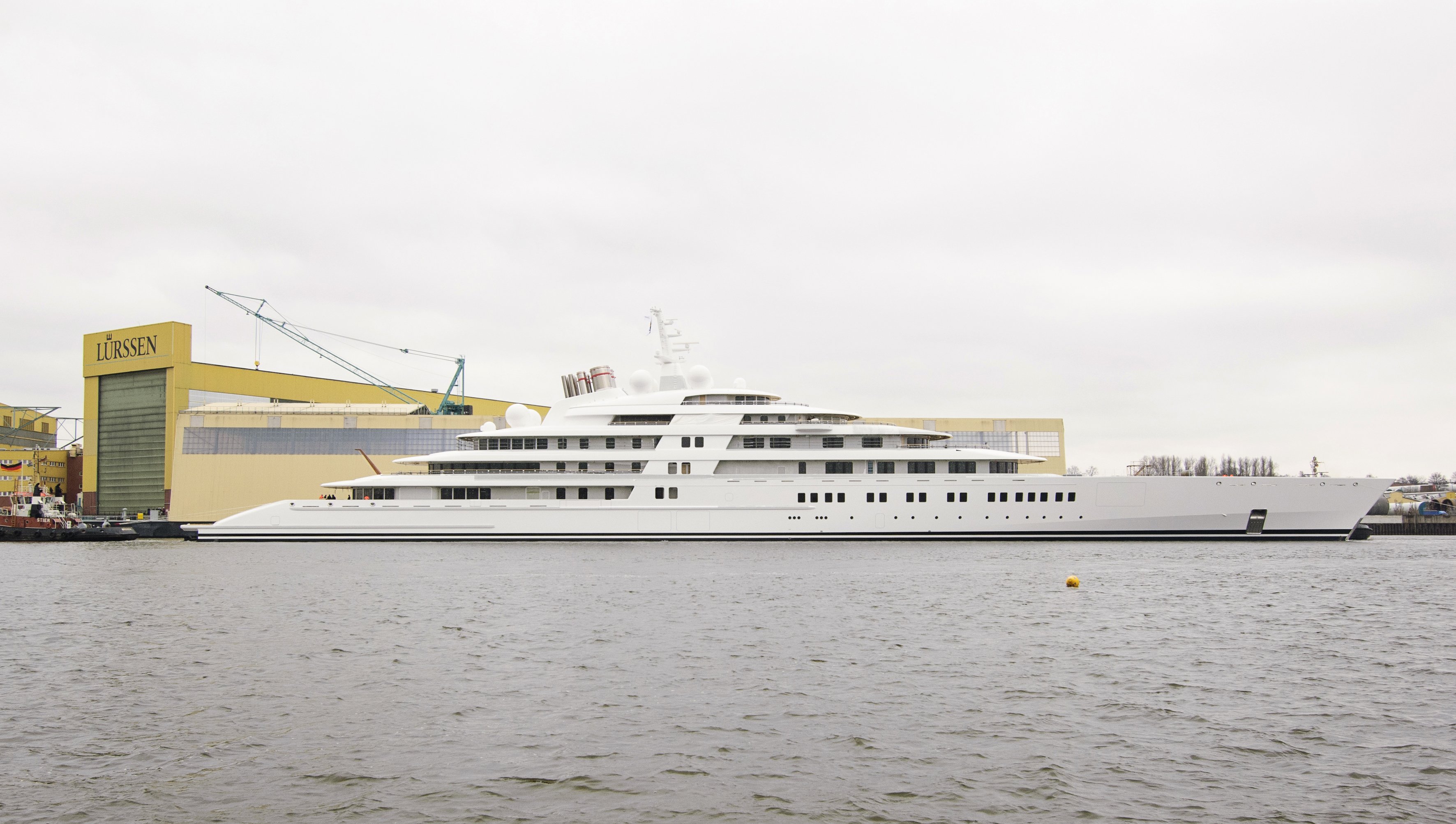 By Arion McNicoll, for CNN

(CNN) — With the launch of the gleaming new Azzam, Russian billionaire Roman Abramovich can no longer lay claim to being the owner of the world’s largest superyacht.

At 590- feet long, the Azzam is 57-feet longer than Abramovich’s mighty Eclipse — previously the largest yacht on the waves. The hulking superyacht is significantly longer than a football field, larger than the US Navy’s Arleigh Burke-class destroyer and more capacious than many popular cruise ships.

Last month, the behemoth eased cautiously out of its shipyard in Bremen, Germany, ushered by a team of powerful tugboats which were dwarfed by its enormous scale. The yacht has been kept under wraps throughout its construction for the past three years.

The identity of the huge boat’s owner remains a mystery, but some speculate that it belongs to a powerful Middle Eastern billionaire.

Just building the yacht cost a staggering $605 million — a fee which doesn’t even begin to take into account the sky-high costs of its annual upkeep. In his book on the Lady Linda superyacht, author G. Bruce Knecht said that, “operating and maintaining a yacht is at least 10% of what the thing cost.” By which estimation, just keeping the Azzam on the water could cost as much as $60 million every year.

The project was brought to fruition by Mubarak Saad al Ahbabi, who assembled a triumvirate of yacht-building super stars: the Azzam’s engineering was done by premier German shipbuilding company Lürssen, the exterior design was by Nauta Yachts and the interior was composed by Christophe Leoni.

At present, very little is known about the interior detailing of the vessel. A spokesperson for Lürssen said “the yacht is still under construction, and I doubt that we will get permission to shoot her even when she is ready.”

Experts suggest that the interior could match or even surpass the opulence of Abramovich’s yacht which is equipped with two helipads, two swimming pools, a cinema, a disco and a mini-submarine that can dive to 150-feet to explore the ocean floor. Bullet-proof glass and armor plating lines Abramovich’s master bedroom, and the boat has its own missile defence system.

The Azzam is described as having a “sophisticated and luxurious interior in a turn of the century Empire style.” Although his primary work is not in yachting, French interior decorator Christophe Leoni says he is “confident that the final yacht is everything and more the owner expects.”

TheYachtPhoto’s Peter Seyfferth commented: “For a yacht of this size, I think that she looks amazingly elegant and sleek.”

As well as its prodigious length, the yacht also travels at a record-breaking pace. With a top speed of over 30 knots (around 34 mph), the Azzam is considered to be the fastest superyacht on the sea.

The Azzam is the latest in a line of vessels to have held the mantle of world’s largest yacht. Prior to the Eclipse, the 482-foot Prince Abdulaziz, owned by the Saudi royal family, held the record for 22 years. And before it, the Rising Sun was briefly the record-holder. Built by American businessman Larry Ellison, The Rising Sun came in at 454-feet and cost $200 million.

With many more billionaires around the world eager to inscribe their names into the history books, it is anyone’s guess quite how long the Azzam will remain at the top. For now, its mystery owner can revel in the knowledge that his or her boat is at the very pinnacle of the yachting pecking order.