By Cynthia Rosenfeld and Bija Knowles, for CNN

While the brave might whip off their underwear for an impromptu dip whenever the chance arises, some of us need more reassurance.

That’s why we’ve collated these 22 spots where you can swim the way nature intended, confident that you won’t attract too much attention.

These luxurious villas — 83 in total — come equipped with a private courtyard featuring a sunken pool and complete seclusion, which means you can swim naked without fear of offending guests or staff.

While this kind of skinny dipping lacks the excitement and back-to-nature feel of taking a dip in the wild, there are benefits — including a hot tub for two, an outdoor shower and a fully stocked mini-bar within arm’s reach.

High tiled walls mean you can undress with confidence in the pool villas at Banyan Tree Lijiang, 7,900 feet above sea level.

Outside of May to August, when seasonal fields of rhododendrons reach full bloom, expect to raise a few goosebumps while streaking into these heated pools in the shadow of Jade Dragon Snow Mountain and a Himalayan panorama.

Black’s Beach is reckoned to be the best by the American Association for Nude Recreation. It’s a spectacular location below Torrey Pines Golf Course, with a long stretch of sand protected by steep cliffs.

The beach attracts naturists and surfers and is a well-established haven where San Diego’s anti-nudity law isn’t enforced. The beach has a regular group of fans, known as Black’s Beach Bares; their website has useful tips on how to enjoy a day on the beach.

Park for free at the glider port on Torrey Pines Scenic Drive and then walk down a steep trail to the beach.

On the slopes of Pyrgos village overlooking Fira, capital of Santorini, this boutique hotel prides itself on the privacy of its 10 suites.

With a private terrace and pool in each apartment, guests can feel free to let their hair down and abandon their swimsuits for an uninhibited swim in the solitude of their own pool.

The hotel has a Turkish bath, which can be booked for private use.

With every rattle of a palm frond, it’s hard not to wonder what other creatures are taking pleasure in this dense bamboo jungle.

That and the occasional screams of rafters coasting along the Ayung River are the only sounds to intrude upon the privacy of each villa at Four Seasons Resort Bali at Sayan.

All 42 thatched maxi-huts come with an outdoor shower that overlooks the river valley and a plunge pool that releases itself into the jungle’s steamy abyss.

Nudists notwithstanding, no one need fear overexposure. Farmers on the opposite bank are nearly naked themselves and too far away to make out the state of play. 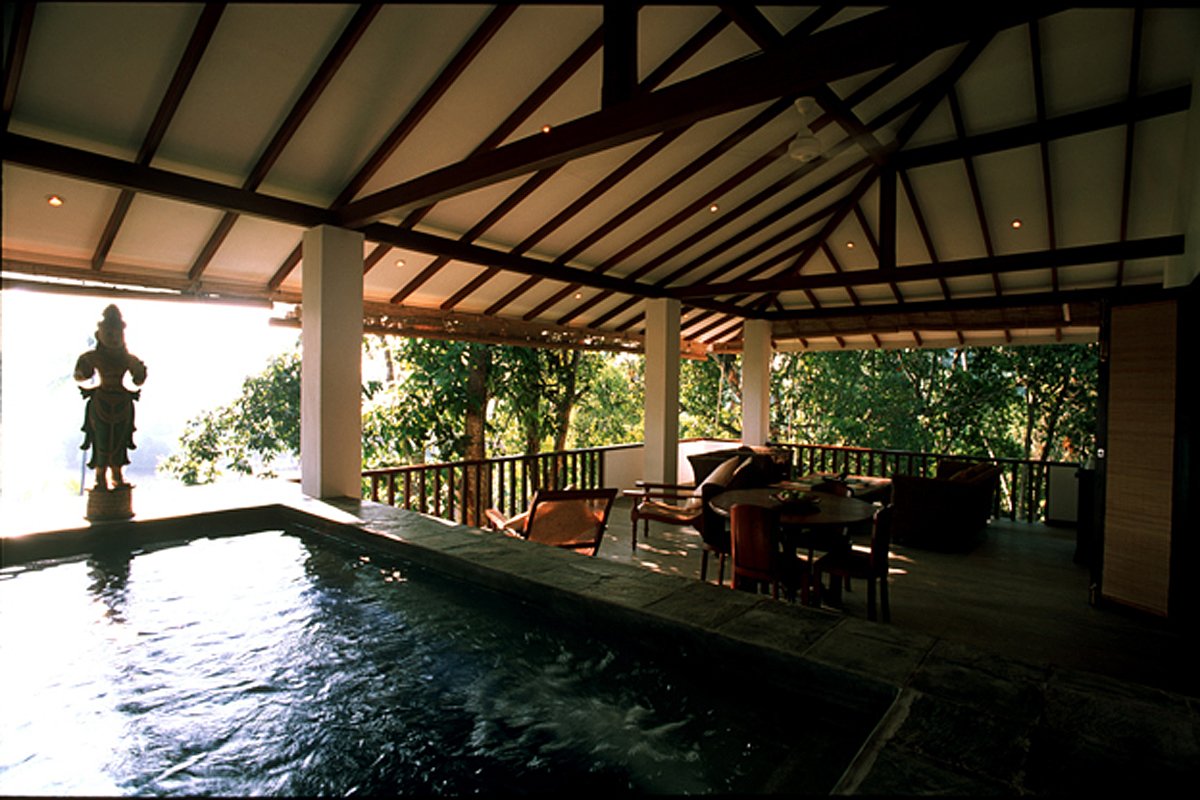 Had Robinson set sail with Mrs. Crusoe in tow, he might have gotten lucky and washed up at Gili Lankanfushi in the Maldives.

Balanced on stilts above a shallow lagoon, the Robinson Crusoe Residences are the most photogenic over-water villas ever to take the character’s name.

With the closest neighbor at least a thousand feet away and no sign of the butler (unless requested), couples are left entirely alone.

You can splash around the Indian Ocean or even snorkel naked.

If you want to feel the sand between your toes and clear blue Med lapping around your face, Golden Beach on Cyprus has some of the best skinny dipping you’ll ever encounter.

Clothed beach-goers gravitate to the area around the beach cafe, leaving a good stretch of sand free for anyone who wants to strip down and soak up the sunshine.

Note: This isn’t an official nudist beach, so it’s best to check who’s around first.

Karpaz; take the Karpaz-Anayolu road going northeast to the tip of the peninsula. Golden Beach is on the right

Croatia is famed for its FKK (freikörperkultur, or “free body culture”) beaches, and the island of Jerolim, the closest of the Pakleni islands to the town of Hvar, is renowned for its unspoiled, rocky shoreline and crystal waters.

It’s popular with naturists (as well as non-naturists), who can be found sunning themselves on white rocky outcrops.

For more privacy, get away from the main tourist area, hike through the forest and find a secluded cove. You can also explore the island’s coast by boat.

You have to be brave to go skinny dipping in Wales, no matter what time of year it is. Nonetheless, author of “Wild Swim” and skinny dipping connoisseur Kate Rew recommends a remote waterfall in the Brecon Beacons as one of the must-dip places in all of Britain.

Lady Falls (known locally as Sgwd Gwladys) has a mystical feel and is a popular walk for hikers, which means that if you want to feel that cool mountain water on your bare backside, you’ll need to be quick and circumspect about it.

Sgwd Gwladys, Brecon Beacons National Park; set off from the Angel Pub in Pontneddfechan, on the road between Neath and Merthyr Tydfil. It’s a 4-mile round-trip walk from the pub to the waterfalls.

Although nude sunbathing isn’t permitted in Hawaii, there are some clothing-optional, nude and topless beaches where it’s accepted and tolerated — if not officially.

Little Beach on Maui is a popular, out-of-the-way cove in Makena State Park where visitors often swim, snorkel and lounge like lizards in nothing but their sun-protection cream.

The beach is recommended by the American Association for Nude Recreation.

Little Beach is west of Makena Point in Makena State Park. Travel on the Makena Alanui road and then park inside the state park and walk to Little Beach.

When it comes to nudity, the Italians aren’t as liberal as their French neighbors. Naturist beaches are thin on the ground compared with the Côte d’Azur, but that’s not to say there isn’t a thriving nudist culture.

Although Rome’s Capocotta (just south of Ostia) has been a haven for naked bathers (and posers) for several decades, a 300-yard strip of shingle beach near Marina di Camerota, in the Campania region, has been designated naturist-friendly.

On the southern side of the Cilento and Vallo di Diano National Park, the clear waters of this quiet coast feel like a stream of fresh air, just where it’s needed.

South of Adelaide, Maslin Beach was declared Australia’s first legal nudist beach in February 1975. But that’s not its only claim to fame.

The beach was also the subject and location of an eponymous film in 1997, telling the story of a group of friends on the beach.

Like other nudist beaches in Australia, Maslin Beach holds an annual Nude Olympics. Events include “best bum” and a three-legged race.

The beach also attracts visitors for its surf and sunsets.

You can take naked swims in the Mediterranean any time of day or night on a naturist cruise along the Côte d’Azur.

Cruises set off from Marseille and can be planned to suit your interests: If you’ve always wanted to sail around the Calanques au naturel, this is the holiday for you. All you need to do is persuade a group of family or friends to share the experience.

On the east coast of the island, on the French side, a broad sweep of yellow sand attracts a variety of visitors.

If you walk along the beach from north to southeast, you’ll notice people wearing fewer and fewer clothes.

By the time you arrive at the Club Orient resort, even the Speedos and thongs will have disappeared. A naked swim in the Atlantic Ocean is the cure for anyone feeling awkward at disrobing.

You can roll straight from bed into a deep, 40-foot-by-13-foot infinity pool outside each Andaman Sea-facing villa at Phuket Pavilions.

The motto, “no tan lines, no interruptions,” means exactly that for couples yearning for none other than each other.

The mini-bar is stocked with Veuve Clicquot champagne and Haagen-Dazs ice cream.

About 12 miles south of Florianopolis in the Brazilian state of Santa Catarina, this white sand beach attracts die-hard naturists and the nude-curious alike.

It’s fine to turn up for a skinny dip even if you don’t want to spend all day getting your pale bits burned.

Praia de Galheta is a naturally preserved area, with no restaurants or other buildings nearby, so bring lunch.

There’s also an archaeological site, and the surf is good. The Association of the Friends of Galheta lobbies and looks out for the interests of nature and naturism on the beach.

This private members club in the heart of New York is a strange mix of pro-establishment-conservatism with near-Nordic enlightenment.

While its male-only members (women are allowed entry only for special events if accompanied by a male member) include the city’s great and ambitious (bankers, lawyers, senior execs), its after-work men-only naked swimming sessions have become legendary.

Much has been conjectured over what really happens during the bare swims. They certainly provide New York’s businessmen with an opportunity to think outside the box.

Wake up in a pillow-strewn four-poster bed in the River House’s east-facing Menik Suite, and you’ll be looking at a private plunge pool as the sun rises over coconut palms.

The inland retreat on the Madhu River is three hours’ drive south of Colombo’s international airport.

From November to March, you and yours can play Adam and Eve around this seven-acre slice of tropical paradise.

Before exposing delicate skin to sun, guests at Taj Exotica can build up to swimming in the buff with four hot and cold experience showers, and seaside sun beds with Maldivian herbal mud-loving therapists plying their trade.

After being slathered in mud and loosened up on cocktails and exotic fruit snacks, its time to drop the pretense (and bikinis and trunks) and swim with the lion fish and wrasse.

The couple’s treatment in the Alepa Suite at the end of a private jetty is as the name of this Taj property suggests: exotic.

Despite being a massive concrete city, Tokyo has plenty of natural thermal springs.

Among the best is Toshimaen Garden Spa. It has a tranquil setting inside a garden designed by Kenzo Kosugi.

If you want to get even more back to nature, there’s Seta Onsen Sanga-no-Yu, where you can contemplate views of Mount Fuji while soaking in the buff.

At Trisara on Phuket’s northwest shore, all 39 villas are well endowed for maximum pleasure.

All-glass French doors open onto a 32-foot-long cerulean plunge pool that appears to drip into the Andaman Sea.

No swimsuits are required, thanks to a profusion of jungle foliage expertly tended by Thai gardeners who turn each of these outdoor playpens into secret sanctuaries.

Piles of plush towels are scattered about the area.

Between diving in and winding down, you can feed your companion from the villa’s trays of aphrodisiac chocolate truffles and Thai mangoes.