(CNN) — Federal investigators say they have no indication the shooting at a Mother’s Day parade in New Orleans was an act of terrorism.

Such parades — local traditions replete with dancing and brass bands — are known as second-lining. They happen most every Sunday, except during the hottest months in summer

Shots were fired from different guns Sunday, and officers saw three suspects running from the scene, police said. Police are offering a $10,000 reward for help in tracking down the suspects. At least one of the suspects, wearing a white t-shirt, was seen in pictures taken at the scene. 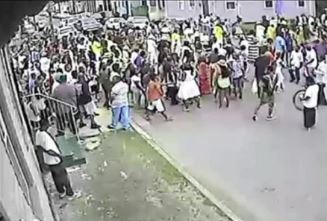 The shooting injured 19 people, including two children, police said. Ten men and seven women were among the victims.

The children were grazed. Other injuries ranged from minor to severe.

One of the assailants was described as an African-American male, approximately 18 to 22 years old, wearing a white T-shirt and blue jean shorts. No one was in custody.

“This is an extremely unusual occurrence, and we’re confident that we will make swift arrests,” said Remi Braden, a police spokeswoman.

Police Superintendent Ronal Serpas told CNN affiliate WVUE that it appears that “two or three people just, for a reason unknown to us, started shooting at, towards or in the crowd.”

He asked anyone with information to call authorities.

“It’s important for us, as I have said, to change the culture of death on the streets of New Orleans to a culture of life, and it’s going to take an all-hands-on-deck approach,” he said.

“These kinds of incidents are not going to go unanswered. We’re going to be very, very aggressive. There were hundreds of people out there today, so somebody knows who did this.”