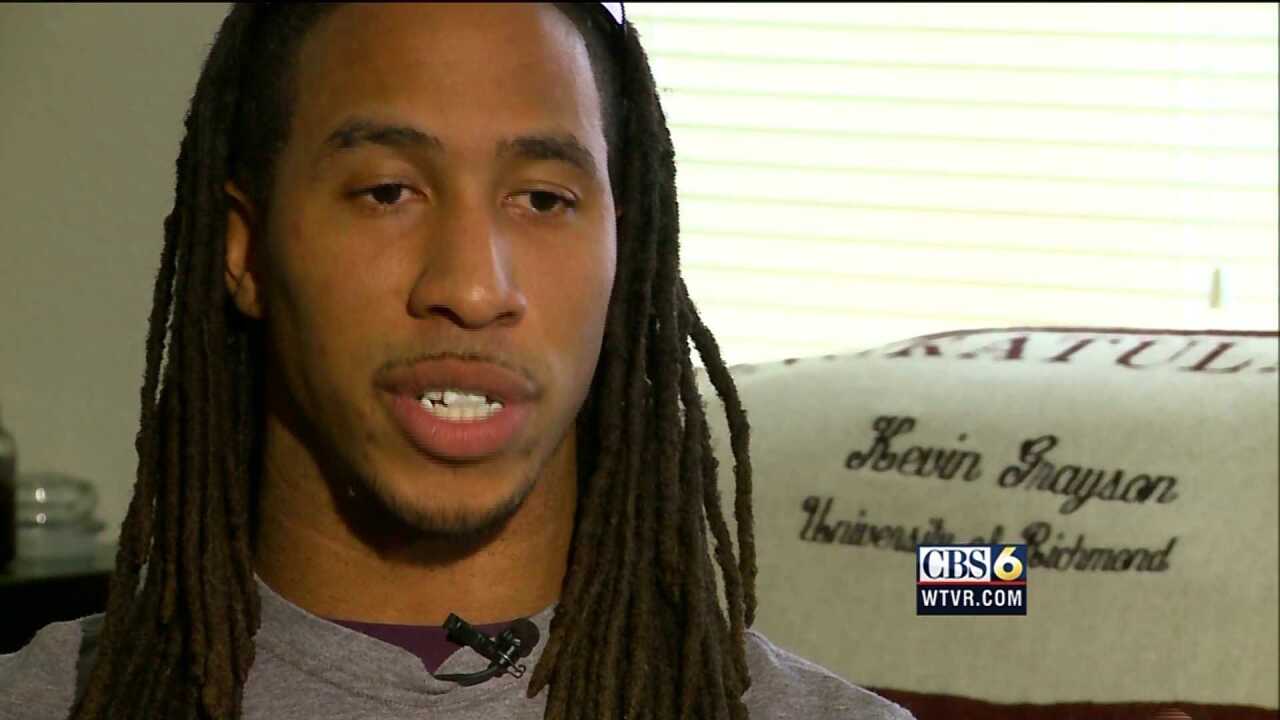 CHARLOTTESVILLE, Va. (WTVR)--Kevin Grayson has won championships at every level of competition--high school, college and professionally--and he has carried a secret each step of the way.

He is one of the most decorated football players Central Virginia has ever seen, and he happens to be gay.

"People didn't believe it because I was an athlete," Grayson said in an exclusive interview with CBS 6.

"They're like 'Kevin plays football, he plays basketball  he runs track--no way you know?'"

Grayson was named all district and all-region while playing both offense and defense at L.C. Bird High School in Chesterfield.

In college he helped the University of Richmond Spiders win the Football Championship Subdivision national title in 2008, and while playing professionally  in Italy last year he was named MVP of his league's super bowl.

But his sexuality remained hidden from many of his coaches and all but a handful of trusted teammates, largely because of the culture that exists in America's favorite sport

Grayson has "no doubt" there are gay players in the NFL currently, and admits to knowing some active players himself. But, he explained that "it's one of those things where you meet someone and you find out about something it's a 'you take it to the grave' type thing."

The locker room is considered a sanctuary in sports, where just about everything concerning a team is dealt with and never carried beyond the doors. Because of that, coaches and players tend to act and talk differently than they would in public or mixed company. Grayson has heard multiple slurs and homophobic insults from coaches and teammates, none of whom realized they had a gay player in their midst.

"While you're in the football aspect of it, no one is really thinking about it. Hyper-masculine sport. You have coaches that are, I guess, just naive to the fact that they could have a gay player in their meeting," said Grayson. "A couple of times I laughed at it. I thought it was funny to think about whether or not if I told this coach, what would they say?"

But it never really crossed Grayson's mind to come out before now. Not because he was embarrassed, but because his focus was on school and football and any distraction would have put a spotlight on the entire team, one that Grayson wasn't willing to shine.

"You don't want to be the focus in that way," Grayson explained.  "Not to say that it's a negative, but when you have people just asking questions about your sexuality and how teammates are taking it, it takes away from the importance of the preseason."

"If you are an athlete, you want to be an athlete," he said. "You want to be known for what you've done on the basketball court, football field, tennis court, whatever. You don't want to be that person who it's always 'the "gay" athlete.'"

Dr. Leticia Flores is a clinical psychologist at VCU specializing in issues of sexual and gender identity. She explained that some gays and lesbians spend much of their day trying to remember who might know about their sexuality, trying to guess how their friends..family and co-workers might react.

For athletes, and male athletes particularly, she said the stress can be compounded by societies' perception of how they are supposed to behave.

"Male athletes are seen to be very masculine, very macho, a guy's guy," Dr. Flores said.  "And people's stereotypes and biases against gay men is that they are the opposite of a guy's guy."

"It's that extra pressure that you can't even remotely show something that would lead someone to suspect you," Grayson said.  "So it makes it ten times harder."

Some of that pressure was relieved when Grayson chose to confide in a few trusted teammates, some of whom he found out were also gay and none of which shunned or turned their back on him. Now he is sharing his story with everyone, not only for the release for himself, but to hopefully inspire others hiding behind one too many masks.

"There's clearly a relief and that relief comes from finally being themselves," Dr. Flores said.  "We call it being, in the psych jargon, being authentic. But you're who you are and you don't have to wear the mask anymore"

Said Grayson of confiding in select teammates:  "It's like the biggest weight lifted off your shoulder. To know that you have a teammate that basically says 'I don't care.'"

Grayson added that he was helped tremendously by a strong support system of friends and family. Without that, he calls hiding one's sexuality "a cancer that can eat away at you."

He shares his story now to be something of an inspiration to others in similar situations to seek out their own support systems and put away the masks.