Arguments about Prop 8 have ended at Supreme Court

(CNN) -- Oral arguments about California's Proposition 8, which bans same-sex marriage, have ended at the Supreme Court after about 1 hour and 20 minutes.

The U.S. Supreme Court hears arguments on Tuesday and Wednesday about the constitutionality of two laws in the same-sex marriage debate.

Tuesday's arguments dealt with one of the laws: California's Proposition 8, which says marriage in that state is between a man and a woman. The high court's decision, expected later this year, could have a profound impact on the definition of families in America.

Most reports from people at the Supreme Court are that the court won't uphold or strike down Proposition 8.

Arguments done. #scotus won’t uphold or strike down #prop8 bc Kennedy thinks it is too soon to rule on #ssm. #prop8 will stay invalidated.

Here's the latest from CNN on Tuesday's arguments on California's Proposition 8:

Oral arguments have wrapped up, according to CNN Supreme Court producer Bill Mears. They went just a bit over schedule, lasting about one hour and 20 minutes.

While we wait on word from the courthouse, consider this: A new CNN/ORC International Poll indicates that 53% of Americans support same-sex marriage. In the same survey, 57% of respondents said they had a family member or close friend who is gay or lesbian.

The same-sex marriage debate is a huge issue, and the lawyers inside were penciled in for an hour to make their cases. Doesn't sound like much time, but to be fair, the oral arguments regarding the Affordable Care Act (aka "Obamacare") last March lasted roughly two hours.

Tomorrow's DOMA arguments have been given one hour and 50 minutes. We'll see if they stay on schedule today. 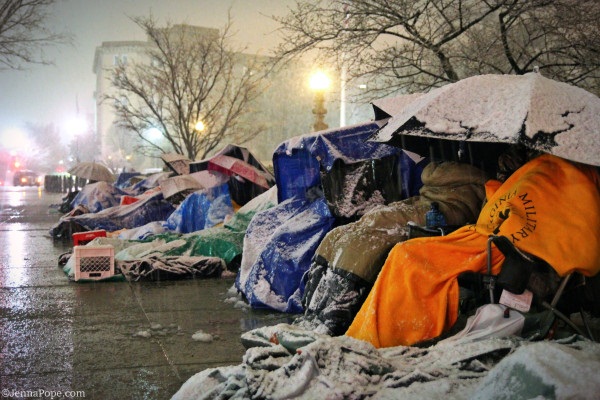 If all is going to plan, Jean Podrasky, a lesbian whose first cousin happens to be Chief Justice John Roberts, is inside the court hearing the arguments.

"I know that my cousin is a good man," she wrote in an op-ed this week. "I feel confident that John is wise enough to see that society is becoming more accepting of the humanity of same-sex couples and the simple truth that we deserve to be treated with dignity, respect, and equality under the law."

You might see a lot of red avatars with a "=" equal sign in your Twitter feed today. Supporters of marriage rights for same-sex couples are wearing red today to show their support -- both on their persons and their social media accounts. That includes Maryland Gov. Martin O'Malley.

Try clicking on each photo to learn more about the men and women who will decide the legal fate of same-sex marriage (for now anyway) -- see where they were born and educated, their career highlights and their religion.

Fun fact: Olson and Boies argued opposite sides of the landmark 2000 Bush v. Gore case, which decided that presidential election.

The temperature is rising a bit and so is the volume. Thousands have amassed in front of the U.S. Supreme court as the morning warms up.

If everything is proceeding as scheduled, oral arguments should be getting started inside the courtroom.

The atmosphere probably pretty somber inside the court, but outside the speakers are blaring with music and the occasional chant: "Gay, straight, black, white - marriage is a civil right!"

CNN contributors David Frum and LZ Granderson have both taken to the mic, keeping the crowd charged up.

"No agency of the government can do for anyone what loving spouses do for each other," Frum said. "Today your families gather before this house of law to claim the right to live as others do without fear."

"Same-sex couples are not here asking for a seat at the table because we've always been here," he added. "We're not here at the steps of Supreme Court to beg. ... I too sing, America."

Nope, we don't have cameras in the courtroom, but the high court should be in session at this point. After a few minutes of routine business, oral arguments should get underway at about 10:15 a.m. In addition to Jeffrey Toobin, CNN has Correspondent Joe Johns and Supreme Court producer Bill Mears watching the arguments firsthand. Stay tuned here for developments.

As the justices gather, the court of public opinion is already weighing in - certainly on Twitter. At 9:30 a.m. ET, five of the top U.S. trends were related to the hearing today. Though, this being Twitter, #ThoughtsInBed was also riding high.

Today's arguments have sparked conversation beyond the steps of the Supreme Court. Supporters and opponents of same-sex marriage are capturing the moment on social media. Here's one from NOH8 Campaign, who support marriage equality:

"Today #Prop8 has its day in front of the Supreme Court. RT if you agree it's time for #MarriageEquality! #NOH8"

Opponents of same-sex marriage have also shown up in droves in Washington, but the rallies have kept peaceful.

Less than an hour away from the start of oral arguments and protests outside the Supreme Court are gaining momentum. Supporters of same-sex marriage and LGBT rights are holding a rally, celebrating the historic significance of today's events.

"We are all participants of American history today - let's get this party started!" two of the organizers shouted at a cheering audience.

The crowd is holding signs, saying, "Married with pride" and "Marriage is love, commitment and family."

Among the speakers is retired Lt. Col. Linda Campbell, a 25-year military veteran, who was allowed to bury her partner, Nancy Lynchild, at Willamette National Cemetery. It is believed to be the first case of its kind, the same-sex spouse of a member of the military to be buried in a national cemetery.

"I know the spirit of my spouse Nancy is smiling on us today," Campbell said today.

Looks like Justice Kennedy will definitely be the one to watch today.

"What am I looking to? Justice Kennedy in his questioning," said California Lt. Gov. Gavin Newsom who, as San Francisco mayor in 2004, stoked controversy by ordering City Hall to issue marriage licenses to same-sex couples.

He told CNN's "Starting Point" this morning that Kennedy would be key because he wrote the majority opinion in the 1996 case of Romer V. Evans in Colorado. The case dealt with Amendment 2, a Colorado initiative that banned state government from passing laws prohibiting discrimination against the LGBT community. The Supreme Court struck down the law in a 6-3 vote.

Protesters are braving temperatures in 30s outside the high court this morning to make their stand in the same-sex marriage debate. Rainbow flags are flapping next to American ones as demonstrators bundled in thick coats and scarves hold up banners reading "The nation is ready for Marriage Equality" and "Faith Alliance to preserve the sanctity of marriage as defined by God."

Today's oral arguments will focus on Proposition 8, a ballot initiative that was approved by California voters in a 52-48% vote in November 2008. The vote happened less than six months after the state Supreme Court ruled marriage was a fundamental right that must be extended to same-sex couples.

Its approval immediately ended same-sex marriages in the state, but opponents of the measure challenged it in court and have succeeded in convincing federal judges at the district and appellate levels to find the ban unconstitutional.

The Supreme Court will open its doors to the public and the media at 8 a.m. ET, two hours before oral arguments are scheduled to start.

The justice to keep an eye on is Anthony Kennedy, who may be the crucial fifth vote on either side, says CNN's senior legal analyst Jeffrey Toobin.

"I will be listening to what Justice Anthony Kennedy says," Toobin said about the oral arguments. The four Democratic appointees - Justices Ginsburg, Breyer, Sotomayor and Kagan - will likely all vote for marriage equality.

"The most likely person to give the fifth vote is Anthony Kennedy," Toobin said.

Supreme Court justices this morning will launch an epic dialogue when they hear oral arguments in the first of two appeals to state and federal laws restricting same-sex marriage.

The first round today will deal with an appeal of California's Proposition 8, which defines marriage as between a man and a woman. The second round, scheduled for tomorrow, will tackle the 1996 federal Defense of Marriage Act (DOMA) and a constitutional appeal over same-sex marriage and "equal protection."

The arguments will start at 10 a.m. ET today, but don't expect a decision until at least June.