As a giant red backhoe gouged into the Florida home where a massive sinkhole swallowed a man, pieces of the family’s lives were pushed into public view.

Walls with picture frames on them came crashing down. Baby toys and clothes on hangers were raked across the ground.

A woman wept as an official handed her a framed portrait. Others lovingly salvaged military awards, a pink teddy bear and an American flag that hung near the house’s front door. The family Bible bore claw marks from the backhoe’s bucket.

Workers demolished the blue, one-story home as carefully as they could Sunday and Monday to try to protect family belongings.

By Monday afternoon, all the walls of the house were gone and “a lot of the debris” had been removed, Hillsborough County spokesman Willie Puz said.

“What we’re going to be doing now is to try to stabilize the hole with gravel,” Puz added.

Officials have said Jeff Bush’s body won’t be recovered. It remains buried somewhere in the sinkhole that stretches 20 feet wide and more than 50 feet deep.

Authorities made the heartbreaking decision to stop the search for Bush, 36, after his odds of survival became abundantly clear.

“We just have not been able to locate Mr. Bush, and so for that reason, the rescue effort is being discontinued,” Hillsborough County Administrator Mike Merrill told reporters Saturday. “At this point, it’s really not possible to recover the body.” 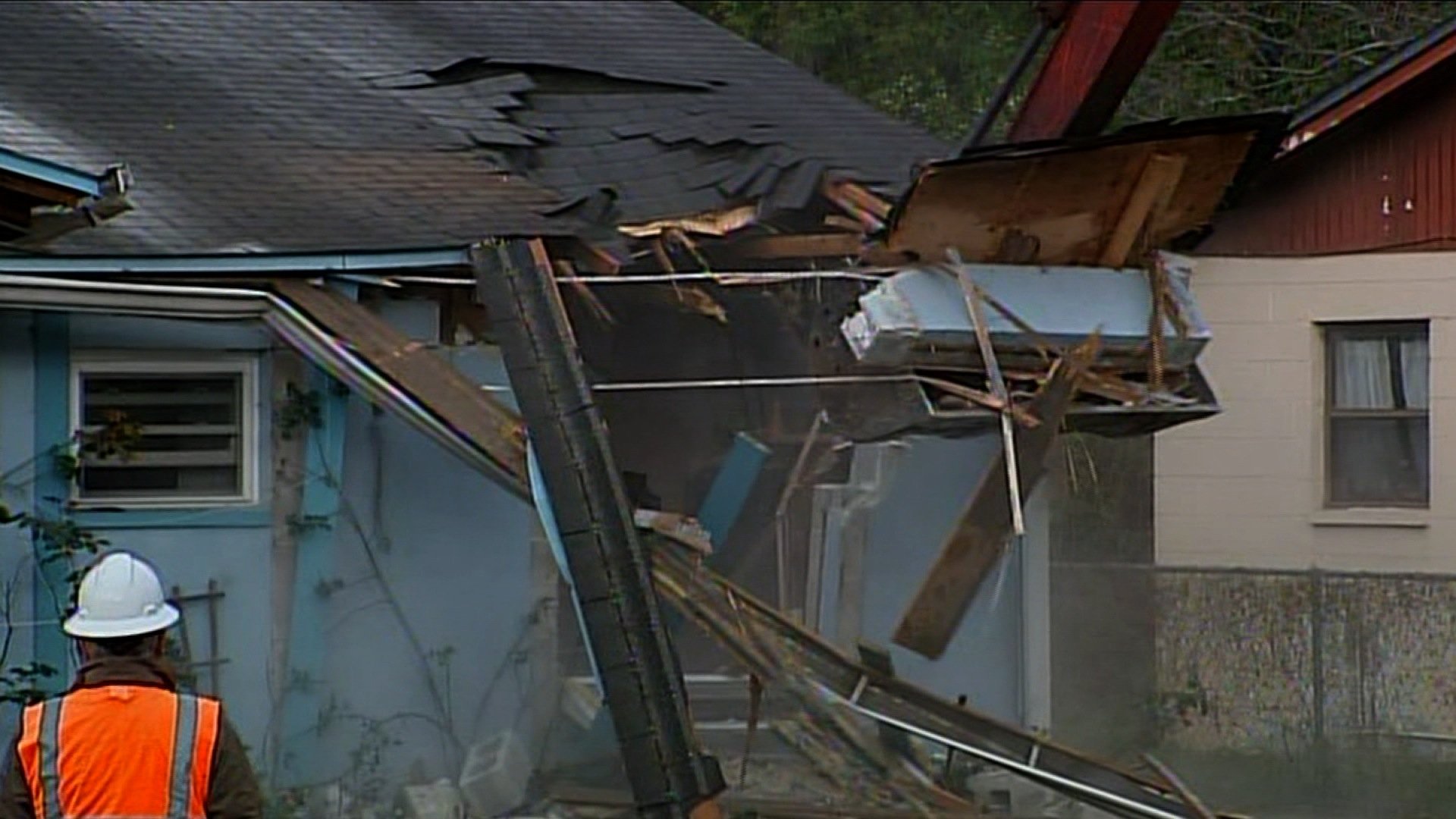 The family’s nightmare began Thursday night, just as everyone was about to go to sleep.

A deafening noise shattered the peace in the house in the Tampa suburb of Seffner.

Jeremy Bush jumped into the hole and frantically shoveled away rubble. But as the house’s floor further collapsed, a sheriff’s deputy pulled him to safety and his brother remained trapped below.

“I couldn’t get him out,” Jeremy Bush said, weeping. “I tried so hard. I tried everything I could.”

Jeremy Bush and four others, including a 2-year-old child, were uninjured.

‘One step at a time’

After the search for Jeff Bush ended, attention turned to razing the house because officials warned it could collapse at any time.

The demolition crew worked for only a few hours Sunday to give the family time to sift through their belongings, Merrill said.

Once officials get a better view of the sinkhole, “they can get a sense of what the next step is,” Merrill, the county administrator, said Sunday.

“This is one step at a time, because we really don’t know what we’re dealing with here,” he said.

A common problem in Florida

Sinkholes are a common problem in the state, according to the Florida Department of Environmental Protection.

Florida lies on bedrock made of limestone or other carbonate rock that can be eaten away by acidic groundwater, forming voids that collapse when the rock can no longer support the weight of what’s above it.

Hillsborough County, on Florida’s west coast, is part of an area known as “sinkhole alley” that accounts for two-thirds of the sinkhole-related insurance claims in the state, according to a Florida state Senate Insurance and Banking Committee report.

A sinkhole opened up Monday afternoon about three miles from the Bush home. The hole was between two houses, one of them vacant, and caused no structural damage, Hillsborough County Fire Rescue said.

The hole measures 12 feet across and four to five feet deep, said Puz, the county spokesman. He said there is no reason to believe the holes are related.

The crater that suddenly caved under the Bush house devastated a family that had lived there for generations.

After officials called off the search for his brother’s body, Jeremy Bush told Bay News 9 the family was despondent.

“It’s not just I lost my brother. There are so many memories in this house,” he told the CNN affiliate. “My wife and her brother and the whole family.