RICHMOND, Va. (WTVR) - The six-week wait is over and the winner of the McGeorge Prius Giveaway has been announced.

One lucky winner, Jason Sell from Richmond, was randomly selected from the thousands of entries CBS 6 and McGeorge Toyota received.

Sell, who picked up the car Wednesday, said he entered the contest on a whim after he received a contest email from CBS 6. [Click here to sign up for contest emails from CBS 6]

The 2012 Prius gets an estimated 51 mpg in the city and 48 mpg on the highway? Click here to learn more about Prius. Plus, McGeorge Toyota has eight other vehicles that get 30 mpg or better!

Toyota has more hybrids on the road that all other automakers combined! 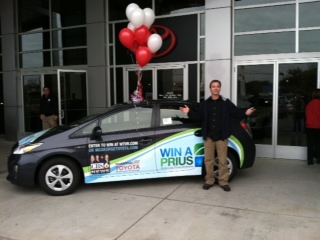