Big crowd turns out for Romney event in Chesterfield

CHESTERFIELD COUNTY, Va. (WTVR) - After Thursday night's vice presidential debate, the candidates were back on the campaign trail Friday.

A big crowd turned out for a campaign rally with GOP presidential candidate Mitt Romney Friday in Chesterfield County.

The event took place at the Mobility Supercenter, located at 7450 Midlothian Turnpike, at 11:30 a.m.

Additionally, President Barack Obama will head to Williamsburg for a debate training camp this weekend.

The president said he is gearing up for a more aggressive performance in this coming Tuesday's re-match with Romney. That debate will feature a "town hall" style format.

Romney was widely seen as the winner of the first round last week in Denver. The two candidates have their third and final debate Oct. 22 in Boca Raton, Florida.

CBS 6 News and WTVR.com have a crew at the rally. Watch CBS 6 News at 5 p.m. for continuing coverage of this story. 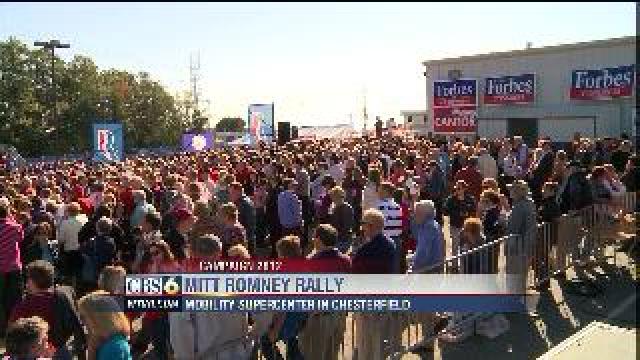