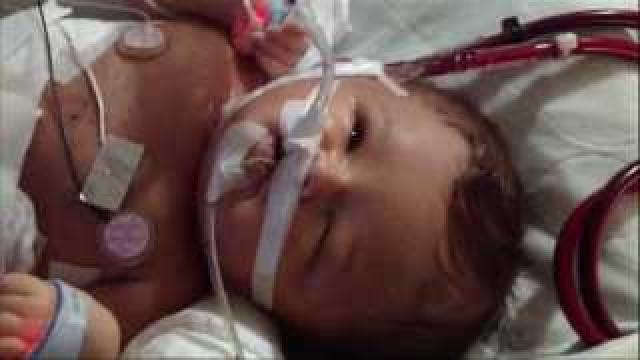 RICHMOND, Va. (WTVR)–The sound of her parents’ voices and the touch of their hands, are enough to keep four-week old Harper Ann Stanfield fighting for her life.

The baby was born with a rare condition known as Congenital Diaphragmatic Hernia, or CDH.  Harper’s parents, William and Erin, learned of their daughter’s condition during Erin’s pregnancy.

An X-ray taken after Harper Ann’s birth on August 20 confirmed the diagnosis.  The baby’s stomach, spleen, intestines and part of her bowel were all up in her chest and the organs were constricting her lung function and development.

Her parents were told the only chance for their daughter’s survival was surgery.

While the first surgery to move Harper Ann’s organs was successful, the baby began losing a lot of blood.  Two subsequent surgeries to stop the bleeding were unsuccessful, and doctors told the family that a fourth surgery could be fatal.

“At that point I felt like, would her last moments be with us or on an operating table?,”  William says.

Both parents decided to take the leap of faith and told doctors to proceed with the surgery.

“One of the surgeons said, ‘I can’t give you a reason as to why she’s still here.’”

One week after her last surgery, Harper Ann is still hooked up to a respirator and an ECMO machine that acts as a heart and lungs to oxygenate the blood.

Doctors are encouraged that the baby is getting stronger and less dependent on the machines by the day.  However, her recovery could take years.

“He wants to hear her cry, that’s the one thing he wants,” says Erin. “I just want to hold her.”

For now, both parents say they’re just happy to be touching and talking to their daughter.

To follow Harper Ann’s progress and to learn more about Congenital Diaphragmatic Hernia, visit her Facebook page at http://www.facebook.com/CDHernia.