(CNN) — While serving on an assignment in Afghanistan on October 23, 2010, Marine Cpl. Juan Dominguez landed on a buried bomb after slipping down an embankment and lost both of his legs and his right arm in an explosion.

On the way to the hospital, he prayed that “if it was God’s will, then take me now.” He was at peace with losing his life in that moment. But it was not his time to die.

As the 28-year-old veteran recovers, he often tells people not to be sad, because he’d do it again for his country. “The Taliban’s purpose was to kill me, but I survived,” he said.

Dominguez has spent months undergoing multiple surgeries and grueling physical and occupational therapy sessions since that life-changing October day. To help aid in his recovery, the Stephen Siller Tunnel to Towers Foundation and its partner, the Gary Sinise Foundation, are donating a new “smart home” for him to share with his wife, Alexis, and his 9-year-old daughter, Victoria. 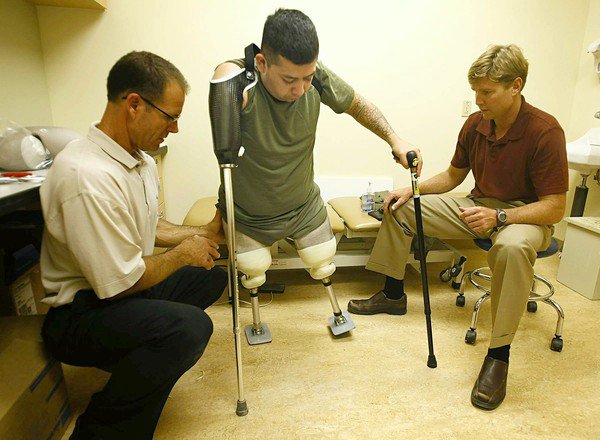 Dominguez and his family will receive the house on September 11.

“I consider this foundation like part of my family,” Dominguez said. “They’ve taken great care of me, with no strings attached, and I couldn’t have asked for more.”

The home is in the Reserve at Paseo del Sol community in Temecula, California. It’s specially built to allow him to lead as independent a lifestyle as possible. The home’s features include kitchen cabinets and shelves that lower for easy access to items, an elevator, and doors that automatically open as part of an electronic-sensor system run from an iPad. A pool will be installed soon where he can continue his therapy.

“Our team has worked with our subcontractors and vendors to create an exceptional home for an extremely deserving American hero,” said Marty Langpap, Inland Empire division manager for Standard Pacific Homes.

By sheer coincidence, the names of the streets in this subdivision are named after victims of the September 11 attacks, which gives added meaning to the Siller family. Stephen Siller gave his life as a New York firefighter on 9/11, and the family foundation to help veterans like Dominguez is a tribute to his life.

Dominguez will receive the keys to the home at 6:59 a.m. PST, the exact time Siller died 11 years ago in the World Trade Center’s south tower.

“Giving Juan a measure of his life back after all he has done, on the anniversary of the day our brother died, means the world to us,” said Frank Siller, chairman of the Tunnel to Towers Foundation.

Siller’s cousin John Hodge said that what impresses him most about Dominguez is his positive attitude through such adversity. “This guy is a role model for all of us, and he’s deserving of great things,” he noted.

Dominguez, who is from New Mexico, chose Temecula because he fell in love with the city after several visits. Its close proximity to San Diego, where he receives outpatient care, made it an attractive draw, too.

One of Dominguez’s favorite spaces in his new home is the music room. He plays the drums and guitar and has a studio where he can enjoy his musical passions. Another highlight is space for a nursery room for when he and his wife (whom he married this year) decide to grow their family.

“We’ve set a goal to have a child within five years,” he said.

Temecula is enthusiastically anticipating his relocation and will welcome him with American flags lining his motorcade’s route on the morning of September 11. Two platoons from Dominguez’s battalion, Temecula police and firefighters, city officials, representatives from the foundations, city residents and Emmy-winning actor Gary Sinise will be on hand to celebrate as Dominguez takes possession of his new house. The home will be draped in a 40-foot by 30-foot American flag and will be unveiled at 6:59 a.m.

“I’ve traveled to many places, and I’ve never been to a town where people are so nice and welcoming,” Dominguez said. “People here already recognize me, open doors for me and consider me their neighbor.”

Dominguez’s $600,000 “smart home” was funded by a $450,000 donation by Ned Wallace, president of Wallace Air Cargo Group Inc. The foundations raised the rest of the money through fundraisers, including a benefit concert starring Sinise and his band in Temecula. The furnishings were donated by Shubert Design Furniture in St. Louis. Volunteers helped move the furniture 1,800 miles from St. Louis to Temecula last week.

“We like to say our foundation is like Scarlett O’Hara, because we both rely on the kindness of strangers to help us out,” Hodge said. “We’ve built homes for heroes like Dominguez in the past, and we need the help of donors to continue more projects into the future.”

Do you have plans to mark the anniversary of 9/11? Share them in the comments section below.