HENRICO COUNTY, Va. (WTVR) - Families who use the Church Run neighborhood pool have not been able to swim for much of the week. Pool managers had to drain and clean the pool after several children on the swim team cut their feet on broken glass.

She said the vandals ate ice cream and unrolled industrial rolls of paper towels. However, she said they did real damage when they opened boxes of light bulbs and smashed them along the pool deck. Some of the glass got into the water she said. 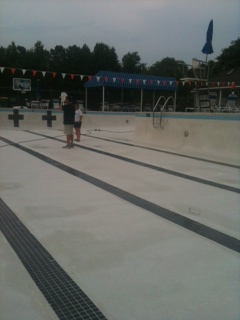 The pool opened for a short time Tuesday after the water was filtered, however members of the swim team cut their feet on glass the system could not filter out.

Thinking the pool management company had cleaned up the mess, the pool had re-opened on Wednesday morning for swim practice, but some children were injured by shards of broken glass still at the bottom of the pool.

On Wednesday, the pool was shut down again and a company was brought in overnight to drain the water and power wash the entire area. The cost of the overnight operation alone was close to $8,000 dollars. She said the entire ordeal has cost the pool around $9,000.

While this isn’t the first time the Church Run pool has been vandalized, Freeman says it’s been the most costly and damaging crime.

Freeman said the pool is now offering a $1,000 reward for information that leads to the people responsible.

Henrico Police Lt. Linda Toney told CBS 6 there were no signs of "forced entry." Freeman said she hoped evidence collected by police -- including fingerprints off of beer cans left at the pool -- will help the investigation.

Freeman said she hoped the pool would be able to late Thursday afternoon.