RICHMOND, Va. (WTVR) – Fire crews are battling a three-alarm blaze outside a paper plant in Richmond.

Firefighters were called to the Sonoco Paper Mill in the 1800 block of Commerce Road near Royall Avenue around 2 p.m. Thursday.

Hagaman said the fire was ignited in an outside storage unit. When the wind picked up, embers spread the fire across the building and onto another set of paper.

Hagaman said firefighters are having to deal with extremely hot conditions because of triple digit temps. In fact, CBS 6 Chief Meteorologist Zach Daniel said it was 101º, with a heat index of 104º, around 3:15.

The extreme heat is why more crews were called to help, because conditions were so hot and smoky.

CBS 6 News' Jon Burkett said the majoirty of the fire had been contained around 3:15.

However, the fire is expected to continue smoldering for hours.

Officials said part of Commerce Road will be blocked off through rush hour. 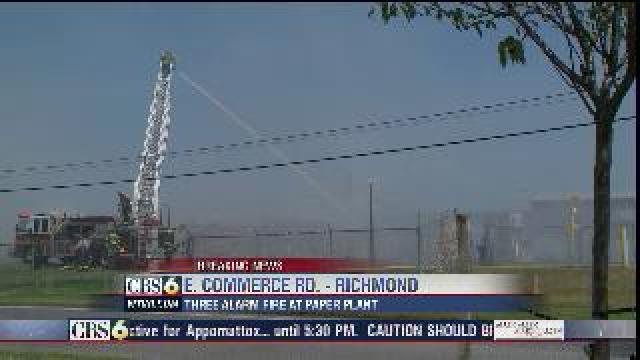