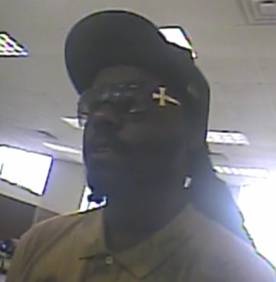 Police released new up close  pictures of the man who robbed the Sun Trust Bank branch on the 1500 block of Hull Street just before noon on June 27th. The man passed the teller a note demanding money. He did not display a weapon, and was last seen leaving the scene on foot heading east on Hull Street.

The robber is described as having a stocky build, and is about 5 feet 6 inches tall. He had trim beard and goatee,and was wearing  sunglasses with gold cross emblems on the frame.