(CNN) — He used sand bags and a water pump, but Chad Mercer couldn’t stop floodwaters from rising to his knees inside his Starke, Florida, home.

“I’m laughing about it now, because I’ve been doing this since six this morning,” he told CNN affiliate WJXT Monday night. “Gotta laugh now.”

But Tropical Storm Debby proved to be no laughing matter as it wreaked widespread havoc in Florida. The slow-moving storm has killed one person, dumped nearly a foot of rain in some areas and triggered flooding resulting in evacuations, rescues and road and interstate closures.

And Debby isn’t finished — forecasters warned the storm could bring another 8 inches of rain to the northern part of the state as it slogs through, headed from the Gulf of Mexico to the Atlantic Ocean. Isolated areas could see a total of 25 inches of rain from Debby. 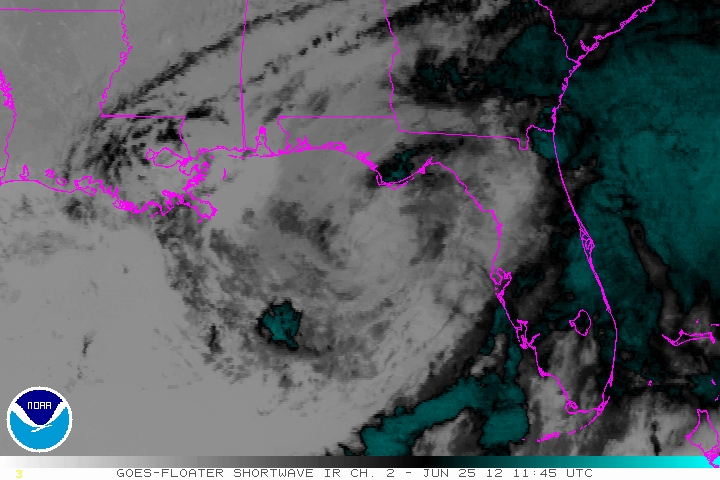 Andrew Norman, who lives near Mercer, was also using sandbags to keep the water out of his home, but believed it might be a lost cause. “It’s already at the doors coming through, so it’s probably going to flood,” he told WJXT Monday.

And Julia Griffen’s home — which she rebuilt after a 2009 fire — was also filling with water.

“It’s a little easier this time,” she told WJXT. “… I already lost the home once. Insurance makes it better.”

The floodwaters stemmed from the rain-swollen Alligator Creek, which began rising Sunday night. By Monday, the flooding was so bad at times that portions of a nearby highway were closed, WJXT said.

Portions of Interstate 10 in Baker County in northeastern Florida were closed Tuesday in both directions because of standing water, according to the Florida Highway Patrol, which posted a lengthy list of water-related road closures on its website.

As of 8 a.m. ET Tuesday, Debby was centered about 85 miles west of Cedar Key, Florida, the weather agency said. The sprawling storm was creeping east at 3 mph, packing maximum sustained winds of 45 mph along the way.

The widespread damage resulted not only from Debby’s slow movement, but also from the storm’s size — tropical storm-force winds of at least 39 mph extended outward up to 240 miles from its center. On Monday, rain bands from Debby passed over Hilton Head Island, South Carolina.

The storm also dumped 5 inches of rain hourly in some Florida Panhandle locations as it stalled in the Gulf earlier this week. In Clay County, authorities were urging residents near Black Creek to voluntarily evacuate, as the creek was more than 5 feet above flood stage, according to WJXT.

“This could really break some records, unfortunately,” Bernita Bush of Clay County Fire and Rescue told the station Tuesday.

Shelters were open in numerous locations for residents across the state.

A tropical storm warning is in effect for the Gulf coast of Florida from Mexico Beach to Englewood. The storm spawned at least seven tornadoes in central Florida Sunday, the National Weather Service said, including one that killed a woman.

Heather Town, 32, of Venus, Florida, about 100 miles southeast of Tampa, died while trying to shelter her 3-year-old daughter during a twister, authorities said. The tornado struck her home and flung Town about 200 feet into surrounding woods, the Highland County Sheriff’s Office said Monday.

She was found still cradling her child, who was being treated at a Tampa hospital. “She never let go of her little one, even in death,” Highland County Sheriff Susan Benton said.

“We heard the proverbial noise, the train,” resident Laura Miller said. “The transformer blew, the windows started busting out. It was just very chaotic, all the glass flying, the debris flying into the house. It was pretty intense.”

The center of Debby is forecast to make landfall on Florida’s Gulf Coast sometime Wednesday or Thursday and weaken to a tropical depression before moving back into the Atlantic and re-strengthening early Friday.

Debby may also trigger a 3-to-5 foot storm surge between Florida’s Apalachee Bay and Waccasassa Bay, the National Hurricane Center said. The west coast of Florida south of Waccasassa Bay could see a 1-to-3-foot surge.

Florida Gov. Rick Scott declared a state of emergency Monday “so we can coordinate the use of all state resources to make sure we can respond promptly if anything happens.”

Debby has followed an unpredictable path since forming over the weekend. Storm warnings once stretched as far west as Morgan City, Louisiana, before shifting eastward on Sunday afternoon and Monday. That raised concerns for crews working on 596 manned oil and gas production platforms throughout the Gulf, run by various companies.

Shell, BP and ExxonMobil began evacuating workers from offshore rigs on Sunday, but BP and Shell had made plans to return to those platforms as Debby turned toward Florida.

CNN’s Ashley Hayes and Kim Segal contributed to this report.