RICHMOND, Va. (WTVR) - Firefighters say the early dinner hour is a bad time for a fire but say it’s a blessing the transformer episode didn’t happen later on a Friday night because instead of minimal damage, there could have been mass injuries. No one was hurt.

Just before 7 p.m. Friday, police and firefighters pushed restaurant patrons and Shockoe Bottom residents away from the fire scene.

"No ma'am, you gotta’ go behind the tape," said one officer.

Fire crews tried to get a handle on a brief but intense fire with flames that shot high into the air. Thick black smoke could be seen for miles as photos from CBS 6 viewer Ken Crouch show.

More than the fire, though, an explosion caused confusion during the dinner hour off Cary Street.

"I heard a popping noise, then the boom," said Calvin Green who was eating at a nearby restaurant. "Then people were running everywhere, people looking out the windows to see what was going on.”

A transformer that property managers say was just replaced Monday by Dominion Virginia Power, burned and fell from the top of the power pole.

A couple of popular night spots, Cha-Cha’s Cantina and Lucky Buddha lost power Friday night, with potential profits up in smoke as well.

A few people that live in apartments above, were also kept away briefly, but the bulk of the damage was sustained when a restaurant window blew out because of the intense heat.

Firefighters say they’re lucky it happened when it did.

“If it was 11 o'clock, the streets would be full, with cars everywhere,” said Jones. “We'd be talking differently, I think." 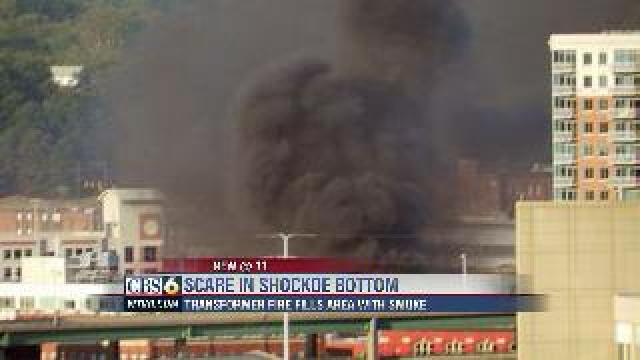