RICHMOND, Va. (WTVR) – The National Transportation Safety Board (NTSB) has released documents from its investigation into last year’s deadly tour bus crash on I-95 in Caroline County.

The information released includes over 125 items gathered from the May 31, 2011 Sky Express bus crash investigation. The documents consist of police reports, accident reconstruction data, interview summaries, along with numerous photos of the bus and accident scene.

The images show the mangled bus with numerous gouges on its left side. Photos from inside the bus show crushed seats and bowed components.  Another photo shows seats tossed from the bus that landed on its roof.

Four passengers died in the crash.

Additionally, regulators shutdown 26 other discount carriers on the one-year anniversary of the crash last week.

The bus driver, Kin Yiu Chung, and the dispatcher, Zhao Jian Chen, face four counts of involuntary manslaughter, one charge for passenger who died in the crash.

“Mr. Chen ordered Mr. Cheung to drive even when Mr. Cheung said ‘I’m too tired to drive.’ Mr. Chen essentially said ‘you have to, or you’re fired,’” said a prosecutor in March. “He is an accessory before the fact. Under Virginia law, an accessory is as liable for the crime as the person who actually committed it.”

The men will be tried separately. 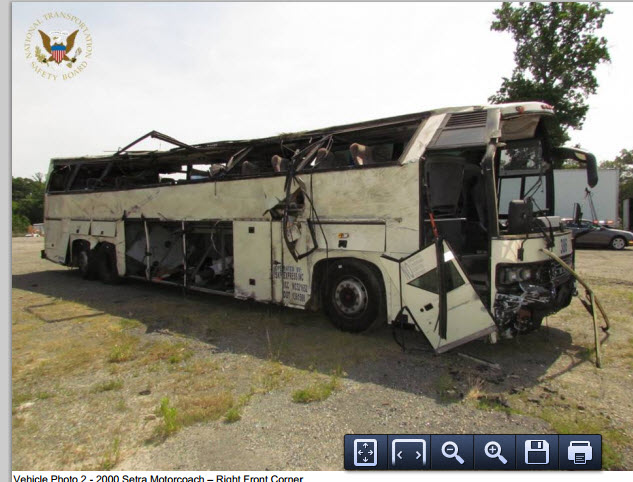