SUSSEX, Va. (WTVR)--Police sources told tell me they don’t think Tuesday’s closing time heist had anything to with the violent bank robbery a month ago, when a preacher’s wife was shot at when the suspects fled the scene.

However, some in Stoney Creek are concerned that their tiny town is being targeted.

After all, Main Street in Stoney Creek has just a grocery store, a post office, a hair salon and a bank.   "It's the country, man.  You don't expect to hear anything happening around here," said Dequan Turner, who lives nearby.

But for the second time in just over a month, the old-school burglar light at Bank of Southside Virginia was triggered.

“They must know the area," Turner said.

Police say the man in a surveillance clip with a plaid Yankees cap and a grin from ear-to-ear handed a teller a note right around closing time Tuesday afternoon. 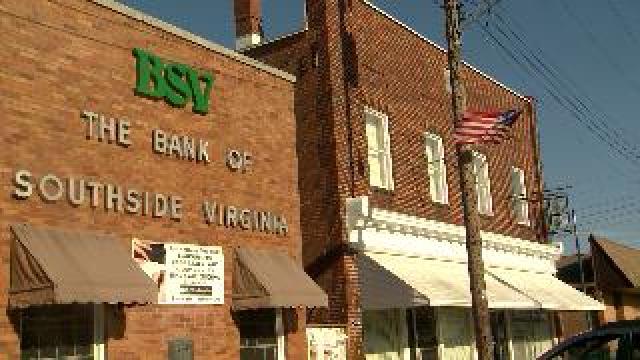 Sources say he was smiling because he actually tripped as he walked into the bank and was laughing at his own clumsiness.  And the source tells me the suspect wasn’t the only one making demands: the source claims the suspect originally had shades on, but removed them when the clerk requested he do so.

"To have one [bank robbery] in Jarratt and two here is a shock,” said Richard Harrell who grew up in Sussex.

Police don’t believe there’s any connection between this suspect and two bank robbers who hit the Bank of Southside Virginia on April 23rd.

During that robbery two gunmen demanded cash, then fired a shot in the direction of a witness.  No one was injured .  Federal agents are looking into that robbery and with this second crime, many in town are feeling a little unnerved, that their little town isn’t so quiet anymore.

“I know it's hard times man but stealing is just wrong,” said Harrell.  “Like my dad always said to me: you get a job, you work hard, save money and build a nest egg."

If you recognize the smiling suspect, call the Sussex County Sheriff’s office at 877-793-1999 or if you know who the other two robbers with sunglasses are, you are urged to contact your local FBI field office.