VIRGINIA BEACH, Va. (WTVR) - Everyone is accounted for after a Navy jet crashed into an apartment complex in Virginia Beach, damaging five apartment buildings Friday afternoon.

Virginia Beach Fire Department Battalion Chief Tim Riley said every person whose name is on the apartment complex master list has been located or it was determined that person no longer lives in the complex.

There have been no deaths reported in this crash, but authorities have not yet given the "all clear" because they want to check under the plane wreckage.

An F/A 18D Navy jet assigned to Strike Fighter Squadron (VFA) 106 crashed into an apartment building around 12:05 p.m. Friday in the 900 block of Birdneck Road near Naval Air Station Oceana, according to officials. [BONUS: Aerial video from scene of jet crash scene]

Six of those seven people were released from the hospital Friday around 5 p.m.  One member of the air crew is still hospitalized. [READ NOW: Woman talks about rescuing neighbors after jet crashes]

A Navy spokesperson said that initial reports indicate the aircraft suffered a catastrophic malfunction, which resulted in crews' ejection. The person in the front seat was

The area around the crash scene has been evacuated and Birdneck Elementary School will open as a shelter for residents around 4:30 p.m.

Additionally, three of the five damaged have collapsed. That's posing a problem for crews because of hidden fires. The structure is just too unsafe for firefighters to get inside.

Crews went door to door looking for folks who may be injured and need help at the Mayfair Mews Apartments. They are working with the management at the complex to make sure everyone is accounted for.

Crews are worried about carbon fibers from the F/A 18. Until crews can seal the wreckage of the plane with wax, and conditions are windy, that danger is present.

As a result, people who live nearby, especially south of the crash site, should stay inside because of the possible health risk.

Officials also warned that if anyone finds debris from the aircraft, that they should call 311 and not touch the dangerous material.

Interstate-264 eastbound was closed at Rosemont Road. And I-264 West was reduced to one lane. Traffic was also diverted from three exits. However, all lanes reopened around 3 p.m.

Riley also said both of the jet's pilots ejected and have been transported to local hospitals. Riley said he assumes they suffered non-life threatening injuries. There has been no word yet on where they landed.

Riley said the blaze is classified as a third-alarm fire and that crews from Oceana Naval Air Station are also helping as well as fire crews from Norfolk.

A massive piece of Navy equipment with firefighters in silver suits arrived around 1:20. A reporter said that those crews are specially trained group to deal with fuel-related fires.

Additional support crews, including a Hazardous Materials response unit, arrived on the scene around 2 p.m.

A retired rescue squad member said the one of the jet's pilots landed on his back porch.

"I heard three loud booms, so I up out from the couch and went to my back door," said Pat Kavanaugh, who lives in the Mayfair Mews Apartments. "When I looked out, I saw a pilot on the ground with a parachute hanging from the building."

Kavanaugh said the pilot had facial lacerations and was in shock.

"He apologized very much for hitting our complex and I said, 'don't worry, it's going to be fine,'" said Kavanaugh. [READ MORE: Pilot lands on man’s back porch; apologizes for jet crash blaze]

One eyewitness said he saw the jet drop out of the sky, heard a loud boom and felt the ground shake.

As he got closer, he said he saw several people coming out of the apartment building. One person was lying on the ground outside, injured and bloody.

A reporter on the scene said that people were gathered in the apartment building's courtyards when he arrived.

Congressman Bobby Scott also released a statement about the crash.

"My office has been informed of the jet crash in Virginia Beach today.  While information is still developing, my thoughts and prayers are with all those impacted.  I will work closely with Congressman Rigell to assist in any way possible," said Scott.

Refresh WTVR.com and watch CBS 6 News for the latest on this developing story. 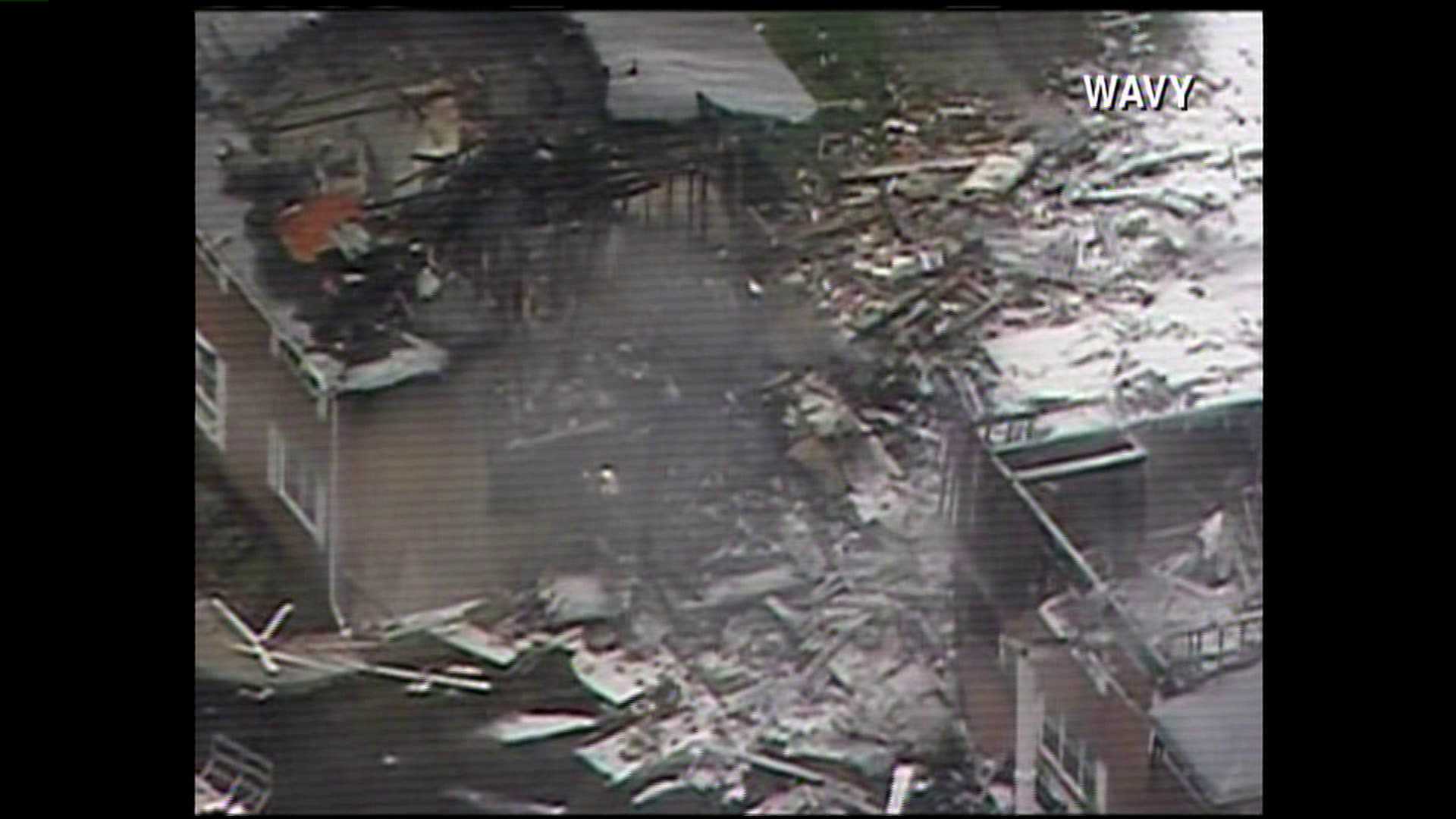 Update on #Navy Jet Crash in Virginia Beach: : I-264 East closed at Rosemont Road. I-264 West reduced to one lane.