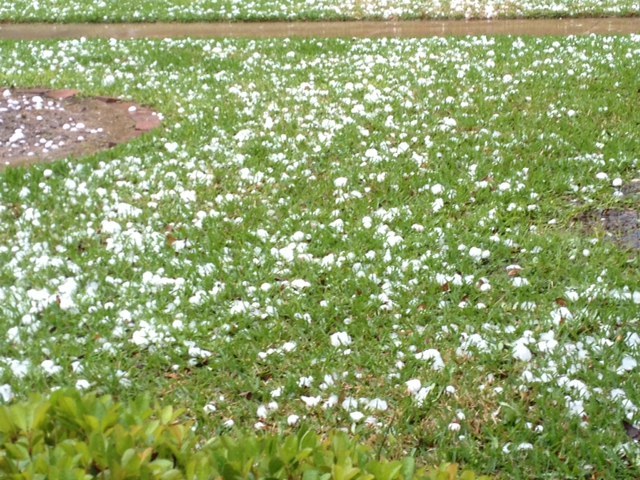 LANCASTER, Texas (CNN) — Rescuers plan to search the Dallas area again Wednesday for anyone trapped after violent tornadoes flattened homes, sucked up tractor-trailers and sent debris swirling in the air.

Between six and 13 tornadoes might have touched down in north Texas on Tuesday, the National Weather Service in Dallas-Fort Worth said. The number is an estimate pending a survey and damage assessment.

There are no reports of deaths so far, according to the mayors of Dallas and Arlington.

Three people were taken to a hospital in Arlington and at least 150 homes were destroyed, said the city’s mayor, Robert Cluck.

“We’ve dodged a bullet,” he said. “We’ve done the primary search. We feel as though we have everybody now, but they won’t give up until they have done all the other searches.”

“It was like ‘The Wizard of Oz,’ ” said Gwen Dabbs, who was not able to make it to an interior room before the storm blew her windows out. She huddled in a corner of her living room covered with blankets as the tornado passed.

“My body is sore from being in the corner. But I don’t have not a cut, not a scratch, and I’m so thankful. Thank you, Lord,” she said.

Before the flurry of twisters made landfall, massive hail pounded the area.

“Once the hail stopped, our electricity went out. I thought, ‘That’s it, we need to get into the bathtub,'” said Nicole Lawrence. “It”s only by God’s grace that I’m here.”

Lawrence said her home was reduced to rubble. She took shelter in the bathroom with her two sons, who covered their mother with their bodies to avoid debris. By the time the tornado swept through, all that was left of her house was her son’s tuxedo hanging in what used to be the closet.

He was planning to wear it to the prom.

During the storm, more than 110 planes at Dallas-Fort Worth International Airport got damaged by hail, the airport said.

It reported airlines canceled 400 departures, and more than three dozen incoming flights were diverted to other airports because of the storm.

Eric Gould was aboard his flight and ready for takeoff when the pilot announced a delay. Suddenly, the skies opened up, unleashing rain and hail as big as golf balls.

“The noise of ice cubes hitting the aluminum exterior of a 757 was as deafening as it was frightening,” he said. “Imagine the sound of dropping a bucket of ice cubes onto a metal roof shed for about 10 minutes straight.”

In Lancaster, Texas, south of Dallas, roofs were stripped to bare plywood. About 300 buildings were damaged, according to the city’s mayor. A citywide curfew was in place.

In one picture at a freight truck depot on the south side of Dallas, one twister flung semitrailers high in the air and hundreds of feet from their parking spots.

Lot owner Wisconsin-based Schneider National Trucking Co. said there were no injuries at the facility, but there was significant damage to the building and equipment.

CNN meteorologist Sean Morris estimated the tornadoes were EF1 or EF2 twisters, at their strongest.

“This is fairly weak in terms of tornadoes, but we saw the awesome power of the twisters as they lifted the trailers several hundred feet in the air,” he said.

Damage could have been much worse, said Dallas Mayor Mike Rawlings.

“The big headline is that we dodged a big bullet,” he said. “We’re saddened by the damage the system did, but we’ve got nobody that’s dead and no significant injures. It really is a miracle.”