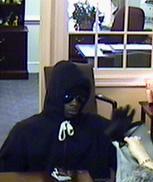 Police said the man approached a teller, pulled out a handgun and demanded money. The suspect took off with an undisclosed amount of cash.

The suspect is described as a black male, about 5 feet 8 inches tall and 150 pounds, with a thin build. Officials said the he was wearing a black hooded sweatshirt with a white drawstring, dark colored pants and sunglasses.