INVESTIGATORS: Men stole $7,000 worth of iPads and iPods

STAFFORD, Va. (WTVR) – Investigators are looking for two men accused of shoplifting more than $7,000 worth of iPads and iPods from a Virginia Walmart. The Stafford County Sheriff’s Office said the theft happened Friday, March 23, 2012, at the Walmart on Garrisonville Road.

According to an email from the Sheriff’s Office, a suspect walked to the electronics section of the store and broke the lock on a case carrying Apple products.

Investigators said that man filled a suitcase with IPads and iPods and ran toward the Lawn and Garden section of the store. Once there he threw the suitcase over a fence where another suspect picked it up. 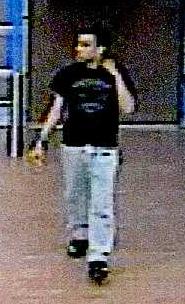 The men then drove off in what investigators described as a possible Chrysler 300, painted in a distinctive two-tone with a white or light color on the roof and a maroon or red color on the bottom half of the vehicle. The car is also outfitted with custom rims, known as “22’s”.

Investigators described the first suspect as a light-skinned black or Hispanic male, age 22-28, 5’6-5’10, wearing a black t-shirt, grey Hollister sweatpants and black shoes and having a tattoo on the inside of his right forearm.

Investigators said a similar theft occurred at a Walmart in Fredericksburg around the same time. Both incidents are being investigated to see if they are related.