(CNN) — The latest version of Apple’s iPad, the genre-defining tablet computer that has outperformed virtually everyone’s expectations since first released in 2010, went on sale Friday at 8 a.m. local time.

“I bought [an iPad 2] for my husband two weeks ago, and then Apple surprised me by announcing the new one,” Dezi Swing of Manhattan told CNNMoney. “The new iPad has better resolution, so I think he’ll like that. I’m going to try to trade in the old one.”

First-day buyers weren’t the only ones excited about the tablet’s display and other features. Critics who got an early look at the new gadget were similarly impressed.

“Since it launched in 2010, the iPad has been the best tablet on the planet,” wrote Walt Mossberg for All Things D. “With the new, third-generation model, it still holds that crown.”

The new 9.7-inch display screen features a “retina display” of 2047 by 1536 pixels, compared with the iPad 2’s 1024 by 768 pixels. It will have a a 5-megapixel camera, representing a significant leap from the current iPad’s lens.

The new version is available in the United States on AT&T and Verizon networks and will be the first iPad to connect to 4G networks. In addition to Apple retail stores, it will be on sale at Best Buy, Radio Shack, Sam’s Club, Target and Walmart.

Apple diehards in Asia were among the first to sample the new product. In Tokyo, about 400 people lined up at an Apple store, where the first wave of buyers were raving about the “beautiful” high definition screen.

“There is some criticism that this [new iPad] isn’t enough of a leap,” CNN’s Kyung Lah reported from the store. “But for the people who stayed out here overnight, the real devotees, they say it’s enough of a revolution for them to brave the cold weather to be among the first in the world to get the new iPad.”

It will cost the same as the iPad 2 — from $499 to $829 based on storage capacity and Wi-Fi capability. Apple also will be slashing the prices of the iPad 2 by $100, making a 16GB Wi-Fi only model $399 and putting it closer to the price point of some less expensive tablets, such as Amazon’s Kindle Fire, that have hit the market in the past year.

Camping outside Apple stores for the latest products has become something of a tradition, and Thursday was no different.

Apple’s No. 1 fan, co-founder Steve Wozniak, has made a habit of joining the throngs. In October, he was first in line at his local Apple store in Los Gatos, California, to get an iPhone 4S, and he lined up at a store in Los Angeles where he was giving a speech, at about 2 p.m. Thursday for Friday’s rollout.

“Oddly enough to say, I didn’t get the high memory iPad in the past, and I can’t put on a bunch of movies like I want to,” he said. “So I’ve got a good reason to upgrade now.”

In Mossberg’s review, he said the new tablet’s display is visibly crisper than the iPad 2’s.

“My epiphany came when I placed my iPad 2 next to the new model, with the same text on the screen,” he wrote. “Letters and words that had seemed sharp on the older model five minutes earlier suddenly looked fuzzier.”

That was a selling point for photographers Heather Waraksa and Jonathan Mehring, who arrived at Apple’s new Grand Central store in New York and, as such, found themselves leaning against a wall, eating bagels in line a half hour later.

Neither has ever owned an iPad before.

“I had a meeting last week where I showed my [photo] portfolio on my laptop, and the guy was like, ‘You should really get an iPad,'” Mehring said. “It looks much better, and a laptop is cumbersome anyway.”

Not everyone outside the stores was focusing on the new tablet’s features.

Protesters from Change.org were also in attendance at the flagship store, with a large banner. The organization said it has received petitions from 250,000 people asking Apple to improve its working conditions for factory employees in China..

“Apple has been a little forthcoming since we first delivered the petitions at Grand Central, but we want them to do better than that,” said Shelby Knox, senior organizer for the group.

“Really, the new iPad should have been called the iPad 2S. In the past, Apple added the letter S to iPhone models that weren’t exactly new but had been tastefully enhanced (iPhone 3GS, iPhone 4S),” Pogue wrote.

“That’s exactly what’s going on with the new iPad. Its technical improvements keep it at the forefront of desirability — just ahead of the snapping jaws of its Android competition — but don’t take it in any new directions.”

David Goldman and Julianne Pepitone of CNNMoney contributed to this report. 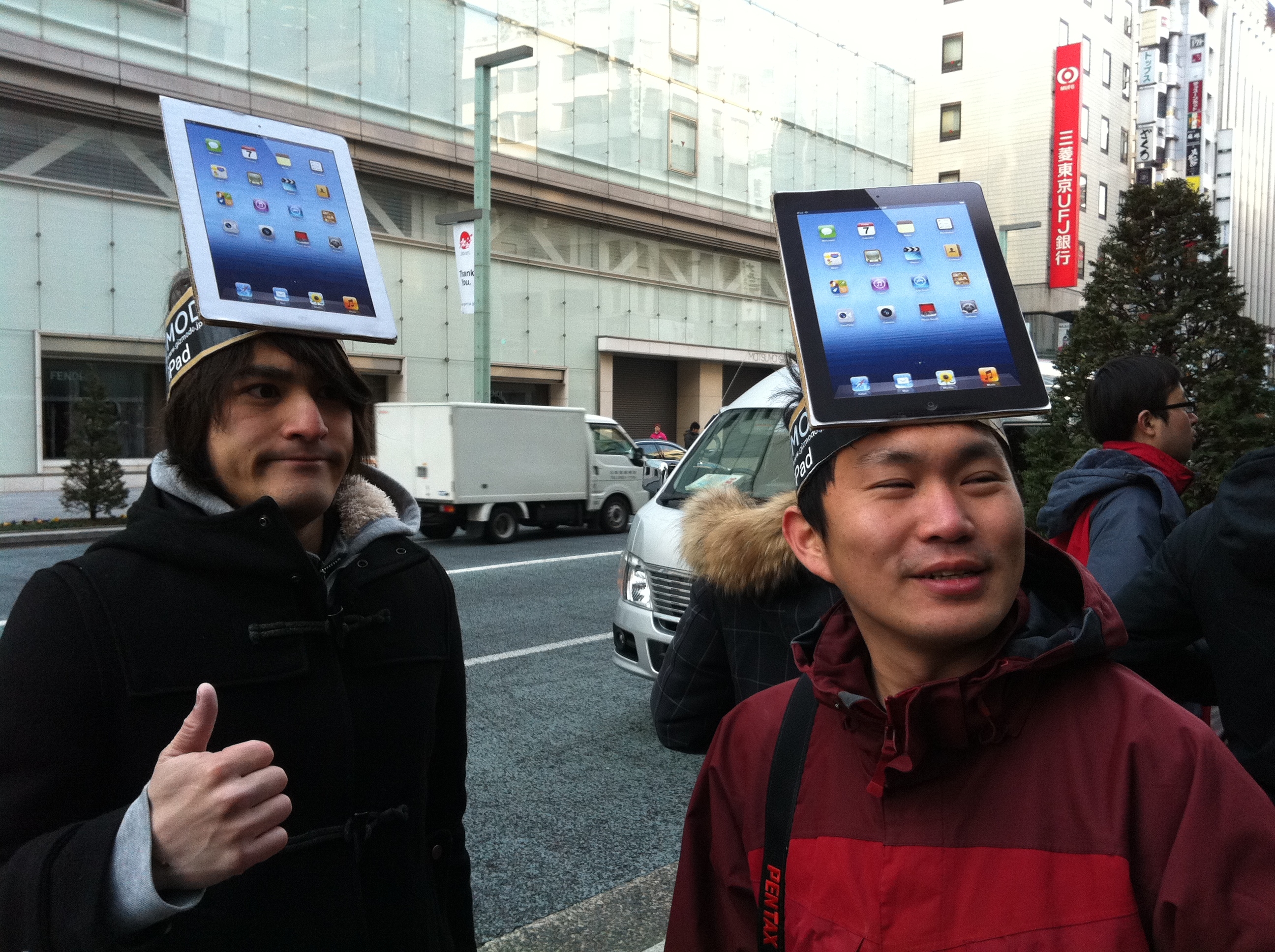